Croatia, Qatar, Brazil and the USA all made it through to the semi-finals of the men’s beach handball competition at The World Games 2022 in Birmingham, USA on Wednesday.

Six games were played in the main round, with the top two teams in each of the two groups going through to the last four.

Group I had the most suspense with, essentially, three teams competing for the top spot. Argentina and Qatar had work to do with Croatia secure following a 2-0 victory opening session victory over Puerto Rico.

Qatar ensured their semi-final spot thanks to a 2-0 victory over Argentina but only after they followed it up with the same score against Puerto Rico.

At the same time, Argentina knew they had to beat world champions Croatia and hope for a shock Puerto Rico win against the Asian champions.

In the end, they managed their side of the deal, defeating Croatia in a monster match, 2-1, which saw 118 points scored. A last-second strike at the end of the first period ensured a 26:24 win for the South Americans and this was followed up with Croatia turning the tables to win the second, 22:16.

So it went to a shoot-out and after the first round ended at 8:8, Argentina started the second round. Ahead 16:14, Croatia’s Valentino Valentakovic saw his attempt blocked but it was a hollow victory with the Europeans knowing they would be playing for a potential medal and not their opponents.

Qatar will now face Brazil and Croatia will take on the USA in the semi-finals on Thursday with all teams now able to have two shots at a medal.

“It is a great chance to come back again and win a medal after four years' absence,” said Qatar’s Mohsen Alyafaei to ihf.info.

“Last time for us was at The World Games in Poland 2017 (they won bronze), but beach handball does not depend if you are the world champion or you are at the second or third level; your effort on the court and the team that makes fewer mistakes will win the competition.”

After carrying two points over from the preliminary round, title-holders Brazil were the best-placed in main round group II to finish top, ahead of New Zealand and the USA, with all teams needing just one win to secure their passage through to the first of two chances to win a medal.

The US, playing on home sand and with the knowledge that the IHF have applied for beach handball to be part of the Los Angeles 2028 Olympic Games programme, put on a show in their opener, winning 2-0 against fellow debutants New Zealand to ensure the spot in the last four.

The other group II game of the day saw New Zealand suffer their second loss, a 0-2 defeat at the hands of the South Americans.

Both Bach and Lopez are big supporters of beach handball and have been present at several events over the years. 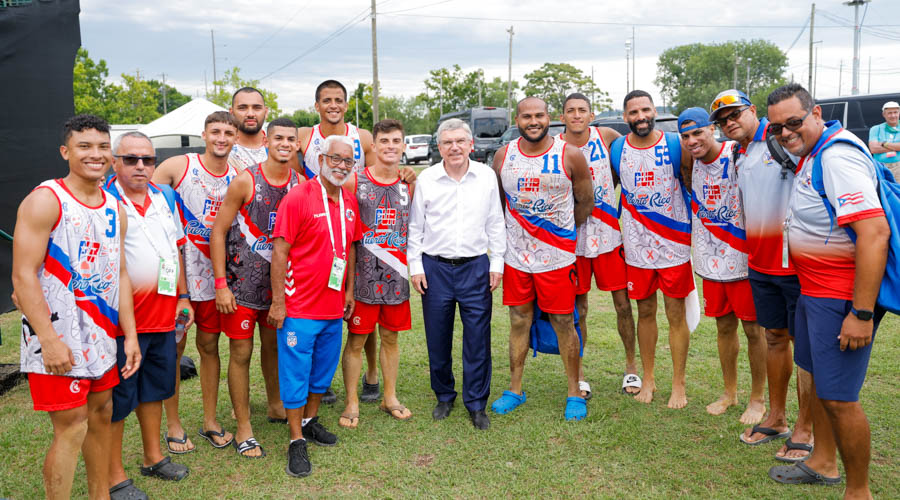