Expanding the reach, developing the sport

The ‘Mbarara City District Handball Association’ was launched in early April at Ntare College in Mbarara with UHF President Sheila Agonzibwa Richardson donating handball equipment including handballs, kits and whistles to a variety of stakeholders including Nyamitanga Technical Institute, Maryhill High School, Mbarara High School, St. Joseph's High School, Mbarara Thunder Handball Club and Ntare College itself. The district is home to a population of just under half a million people.

“I wanted thank our new member Mbarara City for welcoming the game of handball into the district,” said Richardson at the launch event.

“Before COVID-19 we had plans of expanding the game to each and every district in Uganda, [so now] we have started where we stopped. We still have that dream and in order to promote the game we promise to support Mbarara City and all our other handball associations where needs arise.”

Beach handball is also a key growth area within the country and the UHF recently finished the construction of a beach handball court in Kakiri, a small town of around 6,000 inhabitants in Wakiso District, central Uganda, just 30 kilometres from capital city Kampala. Following a break in handball activities due to COVID-19, the inaugural editions of the Men’s and Women’s UHF Champions League get underway this weekend (5 June) running across four days at the Ndejje University and Bombo Barracks grounds and featuring the top four teams from both the men’s and women’s 2019 UHF National League.

The group stages take place this weekend (5-6 June), with the finals weekend being scheduled for 12 to 13 June. 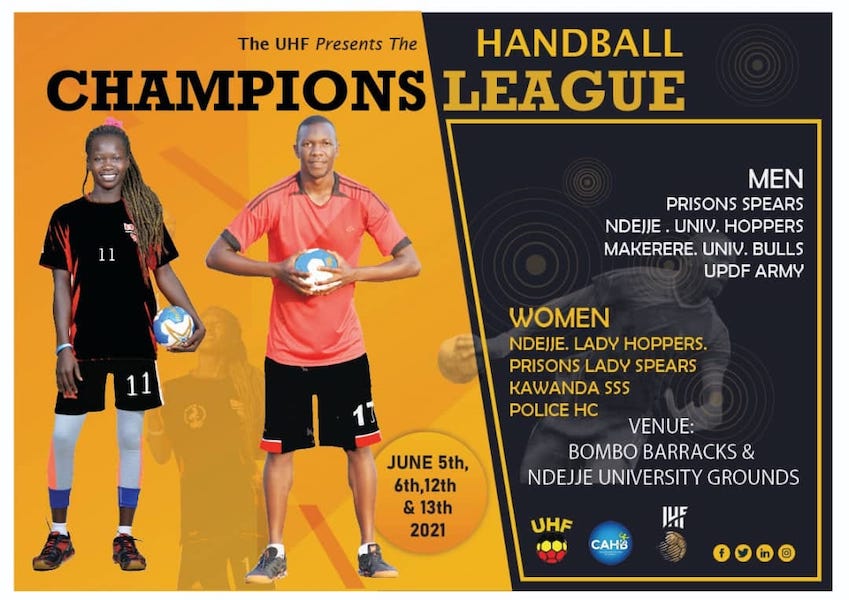 In a busy February, Richardson was elected for a third term in office as UHF President, a role which she will be in for the next four years as well as being awarded an ‘Order of Merit’ by the UOC for her work with handball and other sports, alongside former player and UHF Vice President (Technical) Yayiro Kasasa.

Last year, the UHF launched a ‘COVID-19 Food Relief Campaign’ to support and assist current and former handball players, coaches and administrators who have been badly affected by the lockdown, as reported on ihf.info, while three successful Handball at School courses took place in Greater Kampala in late 2019 before COVID-19 struck the world, and handball activities paused.

A member of the IHF since 1976, handball’s origins in Uganda can be traced back to at least 1971.