After Giampiero Masi, Chairman of the IHF Beach Handball Working Group revealed that 20 June will be marked as International Beach Handball Day, the special celebration and accompanying logo was officially launched today.

On the sand in Heraklion, Greece, the opening ceremony of the 2022 IHF Men’s and Women’s Beach Handball World Championships saw a packed arena welcome 10 handball legends from across all aspects of the sport and two future legends to make the announcement.

"We have people here in Crete who have written the history of our sport," said Masi about the legends.

"Today, more than ever before, we are looking forward to our future and we want to pay a special tribute to them; to our beach handball pioneers, legends and to everyone who gave us emotional moments that we live and remain with us forever." 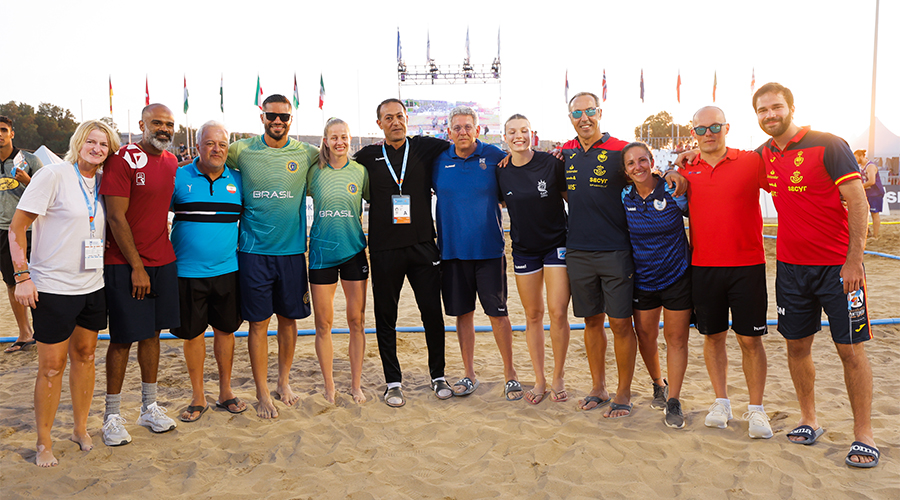 Following the legends, two young players representing the future of beach handball were then introduced with Gisella Bonomi (Argentina) and Guillermo Garcia-Cabanas Carques (Spain), both winners of the first-ever Olympic beach handball gold medals – won at the 2018 Youth Olympic Games – and both now with their senior teams in Greece.

They had the special honour of making a commitment speech to the crowd, sharing the text together.

“In front of our legends, we are here to make a promise and a commitment,” said Garcia-Cabanas Carques before Bonomi took over. “We promise that we will learn, evolve and we will do our best to ensure a bright future for beach handball," she concluded.

A specially-designed flag was then shown on the electronic scoreboard after Masi concluded the ceremony within a ceremony, inviting everyone to see the design.

“I'm feeling a great emotion today,” he said. “The previous summer to June 20 1992, myself, together with two coaches and some sports managers had the intuition to play handball on the sand and I began to write the rules of the game.

“This moment changed my life and the lives of 1000s of people worldwide. Thirty years have passed since that day and here in Crete we have people who have written the history of our sport.”

Speaking after they had been honoured, a number of legends gave their thoughts.

“To be part of beach handball family is always a pleasure and to be awarded by that same family is something anybody should be proud of,” said Davor Rokavec, who the IHF Men’s Beach Handball World Championship as both a player and coach with Croatia.

“To receive that recognition in front of all those athletes that are present stars is a big honour for me and I would like to thank everyone involved in this great ceremony.”

Still playing for her national team, Brazil and celebrating the 10-year anniversary of being voted MVP at the 2012 IHF Women’s Beach Handball World Championships, Patricia Scheppa was taken aback by the acknowledgement.

“I don't even have words to explain, I was very emotional,” she said. “It's a great honour. I have a lot of love for this sport and this recognition I can't explain, it’s just an emotion and a very great honour.”

Wael Aly, the current Egypt coach in Greece was captain of Egypt when they won the first-ever IHF Men’s Beach Handball World Championship back on home sand in 2004 and could not believe he was put in that group, coming out first.

“I can’t explain what I feel,” he said. “I feel something like I'm shy. I don't believe it because it's a big surprise for me. When I feel I am part of the beach handball family, I can’t find the words to describe it.”

Bonomi also offered her thoughts too.

"I’m honoured to be named with people who made history before I started this beautiful sport and today I am considered part of it," she said. "It was a very special moment and I will treasure it forever. I’m so glad to represent my country at the highest level.

"I was a bit nervous to speak in front of that crowd, but I managed to do it with confidence. It was such a shock for me to be considered as part of a group of people who I admire so much.

"Being part of the beach handball family is motivating. It gives me the hope to continue developing and learning more and more."

The 10 Legends of Beach Handball

The Future of Beach Handball