Learning from the past, living in the present, facing the future: how Spain came full circle

When right wing Carmen Martin made her debut for Spain women’s national team in 2005, ‘Las Guerreras’ had played only three times at the IHF Women’s World Championship, at Norway 1993, Italy 2001 and Croatia 2003.

16 years later, Spain are in the semi-finals for the fourth time, having won the bronze medal once, at Brazil 2011, and the silver medal at Japan 2019. All of Spain’s five medals in the major international tournaments have been won during Martin’s tenure, as her professionalism and never-say-die attitude helped transform the side into a European powerhouse.

Martin, the All-star right wing of the IHF Women’s World Championship in 2011 and the three-time All-star right wing at the EHF EURO (2014, 2016 and 2018), has played alongside countless teammates throughout the years, but has remained a mainstay in the team which she now captains.

Yet Spain 2021 is something special, the first World Championship she plays at home, in front of an amazing home crowd. The feeling was also doubled by the start in the tournament, the best-ever for Spain, with seven wins out of seven games and the fourth semi-final berth in the last seven tournaments.

“It has truly been amazing,” Martin said, after the 26:21 quarter-final win against Germany. “Having everybody so close to us, believing in us and helping us win, it truly feels amazing,” completed the right wing.

Due to a nagging injury, Martin missed Japan 2019, the IHF Women’s World Championship edition where Spain got their best result in history. Yet, this did not deter the energetic right wing, who slotted back into the team immediately, scoring 27 goals in the first seven games.

It has hardly been the best tournament scoring-wise for Martin, yet at 33 years old, she brings more to the team than goals. Her experience is next to none, having played so many tournaments in her career, but the leadership qualities and everything she experienced on the court lifting Spain.

Starting the quarter-final against Germany with a 3:7 deficit, Martin was replaced by Maitane Echeverria, who scored three times to bring Spain back into the game. Yet the captain did not beat herself up, instead trying to instil the fire and the passion back into her teammates.

“We needed to breathe in and out, because the game was not lost. And we came back and delivered a great game, improving minute-by-minute and surprising our opponent with the defence,” added Martin.

That defensive nous was something that ‘Las Guerreras’ always had, irrespective of the name of the coach, whether it was Jorge Duenas, Carlos Viver or Jose Ignacio Prades, who is currently leading the side at Spain 2021 and irrespective of the players who are taking the court. 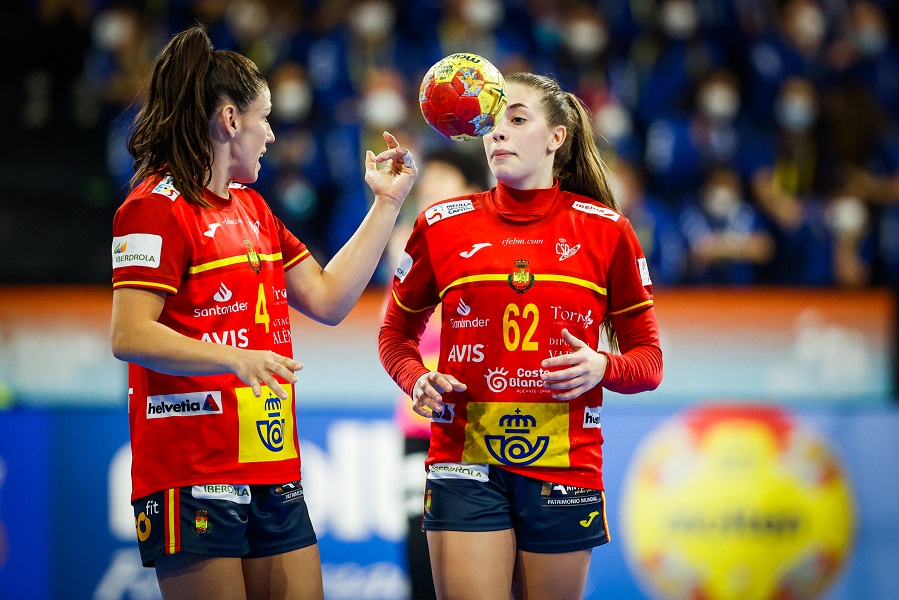 But past and present coaches have not been shy of promoting new talent into the side in the past years, alongside players like Martin, who will play her 250th international game on Sunday in Granollers, the third most for ‘Las Guerreras’, after Marta Mangue (301 games) and Cristina Gomez Aguilar (277 games).

One of those players is right back Paula Arcos Poveda, who was just four years old when Martin was making her debut for ‘Las Guerreras’ and will celebrate her 20th birthday just two days after the final of the 25th IHF Women’s World Championship.

Arcos, one of the top Spanish prospects in the past decade, made her debut in a major international competition at Spain 2021, and has taken the world by storm with her exquisite displays and maturity, being awarded the hummel Player of the Match award after scoring four times in the quarter-final against Germany.

“She does not know what is ahead of her. She really does not know. It will be hard, but her potential is amazing,” laughed Martin when asked about the Arcos’ ceiling.

Spain’s captain, who has probably played more games at a senior level for her national team than Paula Arcos played in her entire career for club and country, knows a thing or two about handball in general and Spanish handball in particular. Therefore, her words might ring true, irrespective of the personal connection between the two players.

With Spain proving time and time again that they can compete at the highest level even when the change of generations occurs, it was one of the few times that the past, present and future were on court on the same time for a European powerhouse.

Visibly emotional, Arcos started crying when she was asked about her antics on the court after the game against Germany.

“I am simply trying to give 100% whenever I take on the court and help my team achieve the best result possible.

“We had good feelings against Germany and now we look to the future,” said Arcos after the 26:21 win in the quarter-finals.

Perfectly said, with Spain’s past, present and future colliding in Granollers, in their attempt to win their first world title. Only two games away now for the hosts, who have never started the competition with seven wins in a row. Extending the streak would mean qualifying for the final, a feature which was secured only one time, at Japan 2019.