Retirement is a difficult step in every player’s life. Ending one’s career is surely a difficult decision and it is a different case on a player-to-player basis, with many struggling to adapt without their daily routine.

Many of the former players are trying to remain in handball, either as coaches, sporting directors or presidents, but plenty are still trying to adapt and find their path after they hang up their shoes.

Therefore, under the initiative of IHF President Dr Hassan Moustafa, the International Handball Federation over the past several years has made the first steps to engage former top handball players in different areas within handball after their retirement. Interested former handball players have been offered support from the IHF to undergo different training and education programmes to work as a technical delegate, coach or referee.

The IHF Former Players Project has now completed three courses, offering guidance to 29 former players, including five in the last instalment, which took place between 5 and 9 October in Jeddah, Saudi Arabia, during the 2021 IHF Men’s Super Globe.

“The IHF wants to recruit and encourage Member Federations to help former players stay engaged in handball after their playing career is over. The idea behind the plan is to improve handball by ushering in former players in key positions in the Member Federations or the IHF, because they have handball in their DNA. With their experience, everything can be streamlined and projects can be built easier,” said Narcisa Lecusanu, Member of the IHF Executive Committee and Chairwoman of the Women’s Handball Working Group.

“There are plenty of tournaments being organised by the IHF, with the IHF World Championship, both for the men’s and the women’s teams, counting 32 teams at the start. Former players can be recruited by the IHF, because we need competent people in the key functions, like delegates, officials and event managers,” added Lecusanu.

During the latest meeting of the IHF Former Players Project, Brazil’s Bruno Sousa, Germany’s Isabell Klein and Finland’s Birgitta Bigo Lindholm took part in panels and workshops on site in Jeddah, Saudi Arabia, under the guidance of several speakers, who discussed and responded to questions which broached different subjects, from the IHF structure to event management and media relations.

“When you have been a player before, you know what to expect, when you coached, you also know pretty much about the handball, but we do not know how the delegates work. I hope this helps me to enrich the IHF. Handball is everything to me and it has always been. When you are a young player, you do not know much. But when you get older, you understand more and more,” said former Finnish player Birgitta Bigo Lindholm. 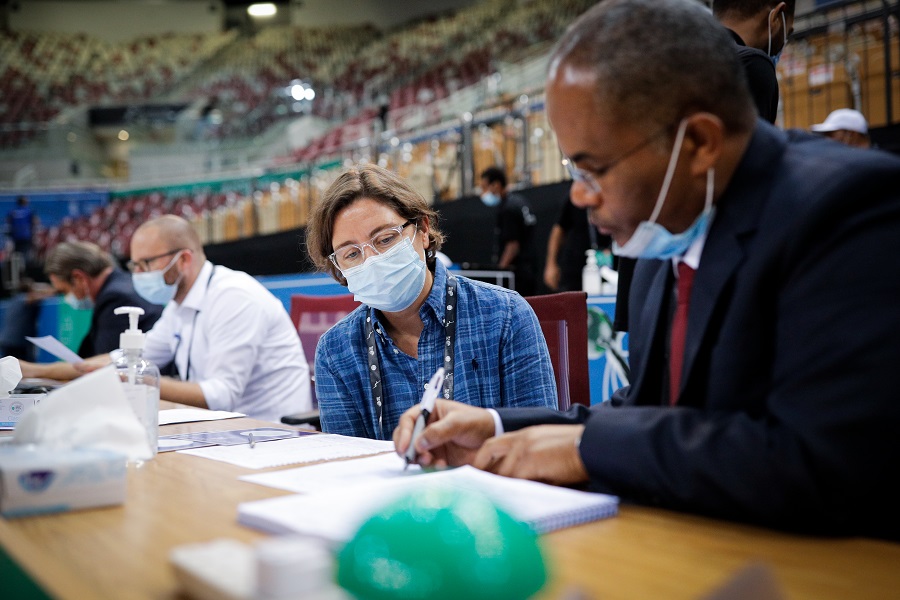 Dr Frantisek Taborsky, Member of the IHF Executive Committee Member gave a lecture on the structure of the IHF, while Jorge Dueñas De Galarza, Member of the IHF Commission of Coaching and Methods, led an analytical course on the ‘Modern Profile of Coaches’.

“I like this part of handball, we had plenty of players who saw how everything works behind the scenes, let’s say. If they like it, they should also go for it. However, it is very important to do this with all your heart, to love what you are doing.”

“The IHF is open to recruit new people, with the new developments that have come and will come in the future. It is also important for Member Federations to hand former players new chances and improve in the future,” added Lecusanu.

The former players present in Jeddah also took part in workshops led by Per Betelsen and Pedja Pavicevic with focus on event management, a theoretical and practical course led by Playing Rules and Referees Commission Lecturer, Per Morten Sodal, and one led by Dietrich Späte, Chairman of the IHF Commission of Coaching and Methods, who took the stage to present the future development of the IHF.

“It is a really great experience, I am very grateful to learn about this perspective of handball. I would love to give something back. It is new for us, for former players, we were lucky to learn from the best, from persons with so much experience,” said Isabell Klein, the 37-year-old former right back who played 91 games for the Germany women’s national team.

“You have the opportunity to learn about the game, the delegates, it is quite nice for us, former athletes, to have a bit of an in-house knowledge about the International Handball Federation. When you stay inside, you learn more, it is a very nice experience to know exactly what happens on the other side of the court. It is very important for us, as former players to give back to handball,” concluded former Brazilian left back Bruno Souza, who had 196 games and 623 goals for his national side.