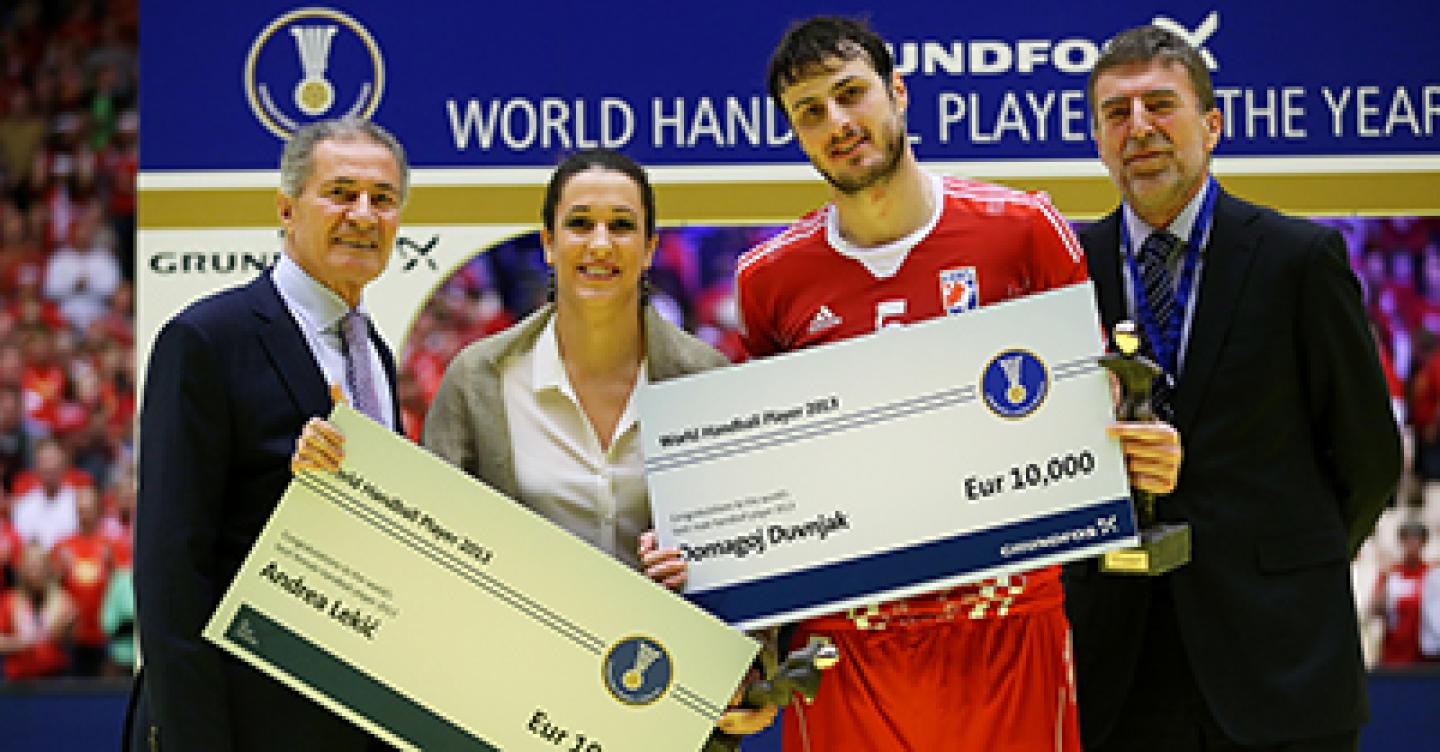 More than 35.000 handball fans from all over the world have cast their votes – and the winners are…..Serbian Andrea Lekic and Croat Domagoj Duvnjak! Both are the 2013 Grundfos World Handball Players of the Year. IHF President Dr Hassan Moustafa unveiled the secret together with Grundfos Director of Corporate Brand Development Mr Kim Klastrup on Sunday (26 January) in Herning, Denmark, prior to the final of the European Championship of Denmark vs. France.

Just prior to his awarding to the World Handball Player of the Year, Duvnjak, who still was in his jersey, had missed the bronze medal after a 28:29 against Spain but was also awarded All Star Player of the European championship as best centre back.
For both, 26 year old Lekic and Duvnjak, it is the first ever Grundfos World Handball Player award in their career, they are the successors of Alexandra Nascimento (BRA) and Daniel Narcisse (FRA). After Ivano Balic in 2003 and 2006, Duvnjak (playing for German side HSV Hamburg) is the second Croat in history to win this award, Lekic (playing for Macedonian champions Vardar Skopje) is the first ever Serbian women, Svetlana Kitic had been the first ever female awarded in 1988 for Yugoslavia.

IHF President Dr Hassan Moustafa and Kim Klastrup handed over the official Grundfos World Handball Player of the Year trophy and a cheque worth 10.000 Euros to both players, who were cheered with a big applause by the 14.000 fans in the sold-out arena in Herning.
Lekic and Duvnjak received exactly each 33 percent of all votes. Second ranked in the women’s voting was Hungarian Anita Görbicz (27%), ahead of their Györ club team mates Katrine Lunde (Norway/20%), Katarina Bulatovic (Montenegro/13%) and 2011 Grundfos World Handball Player of the Year Heidi Löke (Norway/7%).

Lekic, who had started her international career in Ljubljana, was the key player of the Serbian team to win the silver medal on home ground at the 2013 World Championship. Additionally she won the EHF Champions League trophy with her former club Audi ETO Györ (Hungary).
25 year old Duvnjak also won the EHF Champions League in 2013 with Hamburg, was All Star Team player and bronze medallist at the World Championship 2013 in Spain with the Croats. The former Zagreb player was World Championship runners-up in 2009, European silver medallist in 2010 and each bronze medal winner at the 2012 Olympic Games and the 2012 European championship.