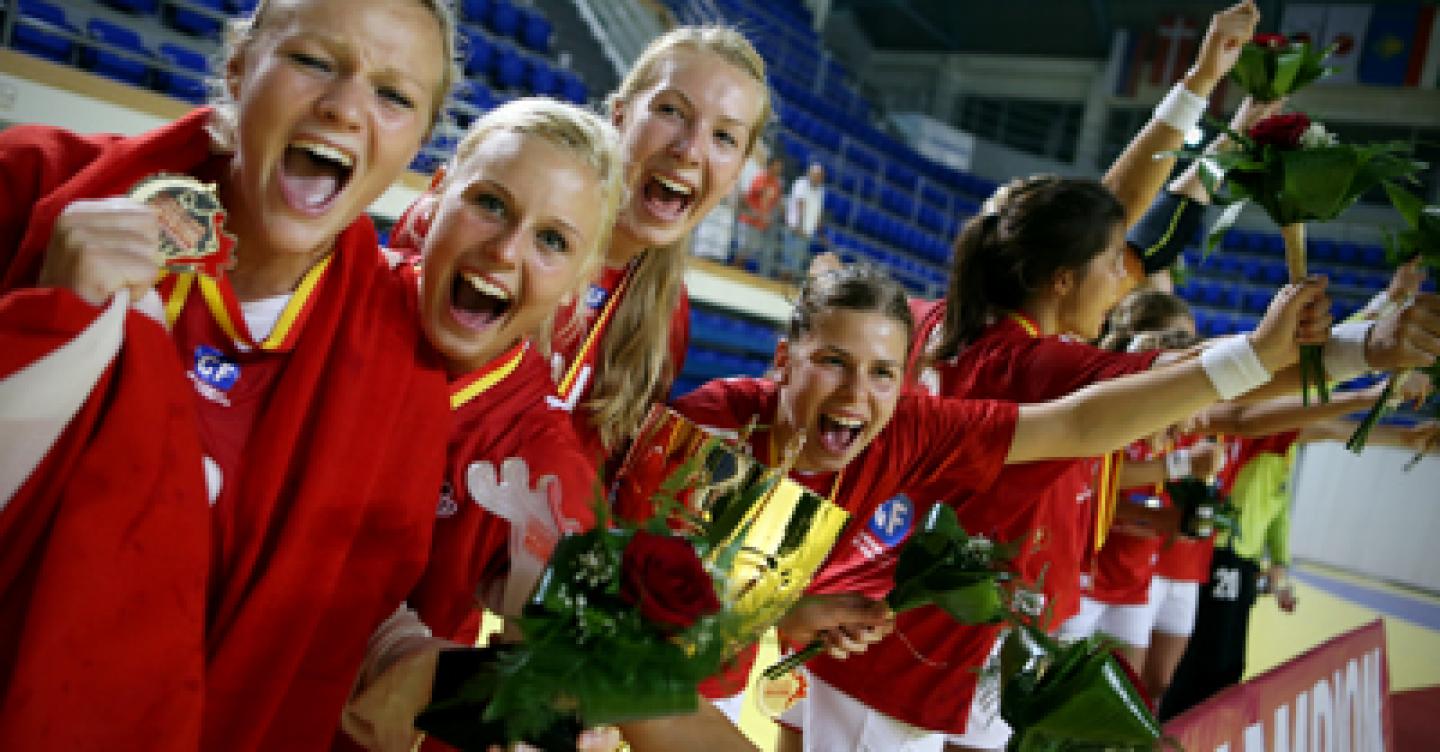 Like in 2006 Denmark are Women’s Youth World Champions. In a nail-biting final of the IV Word Championship in Bar, Montenegro, against Russia, the Scandinavians profited from a last second goal of Freja Kyndbal and took revenge for the last second defeat against Russia in the European championship final in 2011. Like then, Norway is bronze medallist, beating Romania in the 3-4 placement match.

A brilliant tournament ended with the most thrilling of all games – and a last second fast-break goal of Freja Kyndbal made the Danish girls celebrating the gold medal after a high class final, made by Hitchcock. And like in the 2011 U17 European championship final the match was decided with the final whistle. One year ago Russia took gold by a penalty shot with the final buzzer; in Montenegro Kyndbal took the advantage of a save of goalkeeper Louise Egestorp after a shot of Anna Vyakhireva six seconds before the end at the score of 26:26. Kyndbal ran towards the Russian goal, left goalkeeper Kira Trusova chanceless and hit the net with the final buzzer.

Big celebration on the Danish side and bitter disappointment on the Russian side followed – and the red and white dressed spectators later chanted loudly the Danish anthem at the end of the ceremony.

After a strong Russian start, Denmark took control and especially top scorer Anne Hansen (eight goals in total) took the responsibility for her team to lead 15:12 at the break. On the other side Vyakhireva – the later-on tragic figure – was unstoppable by their opponents. In the end she also had eight goals on her tally, but missed some important shots in the second half.

The three goals advantage for Denmark lasted until the 20:17 – before the Russians had their strongest period, turning the game with five straight goals to 22:20. But the Danes were not shocked, took their pace again and re-took the lead. The highly thrilling final stages had started with both teams having chances to decide the game. Denmark took the lead, Russia equalized – and when everybody had expected an extra-time, Kyndbal made the dream of Danish gold come true.

IHF 1st Vice President Miguel Roca Mas and Predrag Boskovic, President of the Organizing Committee and of the Montenegro Handball Federation, awarded the Russians with the silver medals, before IHF President Dr Hassan Moustafa and Zarko Pavicevic, mayor of the town of Bar, handed over the gold medals and the world champions trophy to Denmark on the top of the podium – and started the long party for the second Youth World Championship title for the Danes after 2006.

While Norway had recovered perfectly from their semifinal defeat against Russia less than 20 hours before, Romania missed the medal they had dreamed of. After being clashed by Denmark in their semifinal, they did not have the means and the power to stop the Scandinavian express. Like at the U17 European champions 2011 in the Czech Republic, the Norwegian girls crowned themselves with the bronze medals.

Again the number of successful completed counter-attacks decided the match: While Norway scored 13 goals from fast breaks, Romania only had five counter-attack goals on their account after 60 minutes. Like in their semifinal against Russia, tall back court shooter Emilie Arntzen was another key of success for the Norwegians, scoring seven times, but best shooter of the bronze final was Gabriela Perianu with nine goals. Norway constantly extended the gap to a four goal margin at the break, before the great time of eight-time scorer Andrea Pricopi started. Her goals brought Romania close to turn the game, but Norway then stood better in defence, scored a 7:2 series to 30:22 and pre-decided the game despite a strong Romanian intermediate catch-up chase. At 30:33 three minutes before the end, Romania could hope for an extra-time, but the Scandinavians triple-stroke for the final result.

After silver in 2010, bronze in Montenegro was the second Norwegian medal at Youth World Championships. Their medals were handed over by Leon Kalin, Chairman of the IHF Commission for Organizing and Competitions, and Zoran Radojicic, President of the Local Organizing Committee in Bar.

After losing the semifinal against Romania, Hungary held their heads up high and secured the fifth rank thanks to two straight victories against Japan and Sweden in the placement round. The Scandinavians were totally overran in the starting period, when after the 0:1, the Hungarians scored 10 (!) straight goals to pre-decide the match already in minute 11. When Sweden had heard the wake-up call the rundown of the match was quite equal, but Hungary took the clear profit from their opening period and could not be endangered anymore. Even an again brilliant performance of Swedish goalkeeper Hanna Daglund could not turn the page. The closest gap was a 29:25 four minutes before the end. Szederke Sirian scored eight goals from eight attempts for Hungary, while Miranda Larsson was Swedish top scorer with goals.

Like in their previous matches against European teams before, Japan was dominant in the first part, but then ended empty-handed though this time they were really close. The match was absolutely tight until the middle of the second half, before France forged ahead thanks to the goals of their top scorer Melissa Agathe (seven goals in total). But one thought the game would have been decided at 25:21 for the Europeans, was wrong. Japan equalized again by four straight goals, before Agathe and Prouvensier secured the lucky French victory.  Best Japanese scorer was – as usual – Haruno Sasaki with ten goals, aside goalkeeper Moeka Mizuochi saved 16 shots – but not enough to take the seventh rank.

After the Danish winners had celebrated their titles in the confetti rain, the official Youth world championship flag was handed over by Predrag Boskovic to Dragan Nachevski, representative of the upcoming organizer of the 2014 Youth World championship, FYR Macedonia.