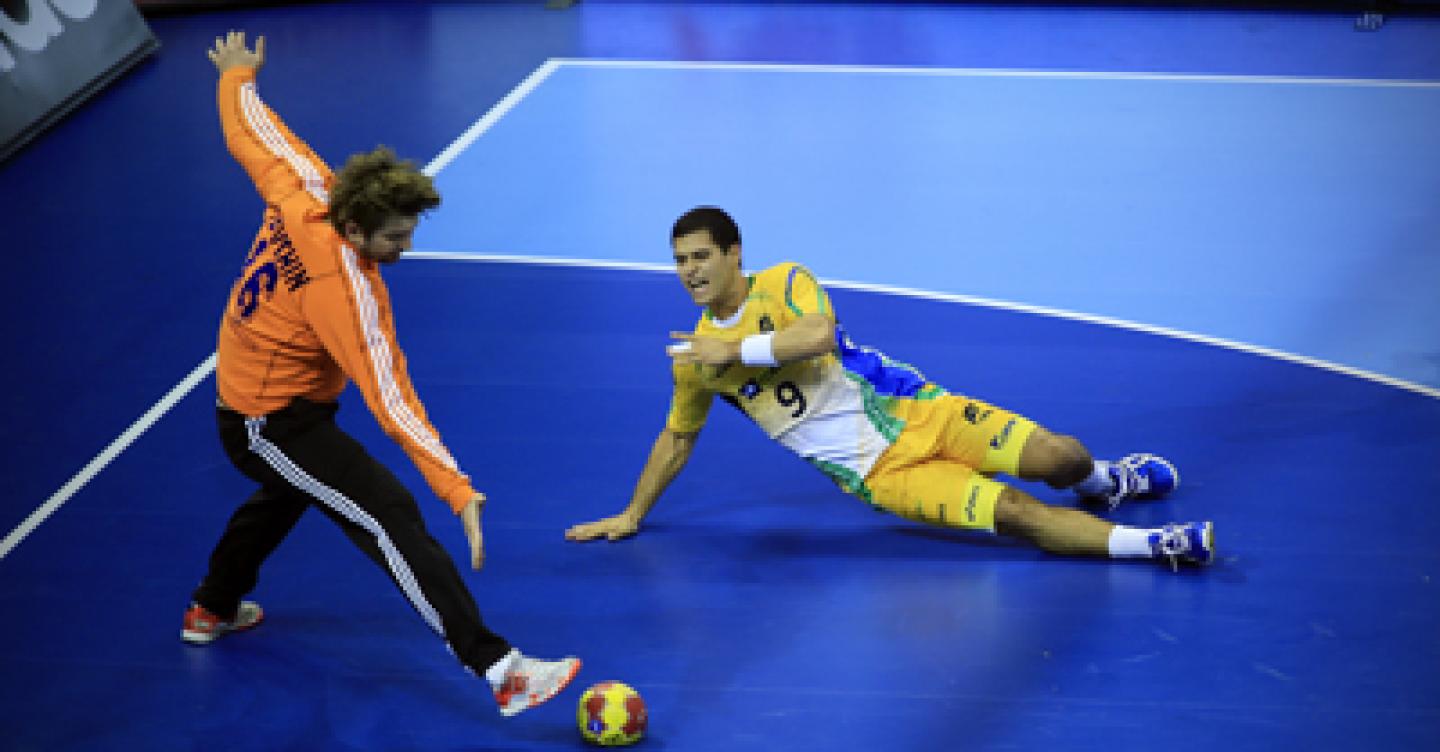 The upswing of the Russian team continued, but their lucky and highly close 27:26 (14:14) eight-final victory against Brazil in Zaragoza had been much harder earned than expected. The Pan-American runners-up was on eye level for 60 minutes, but could not stop brilliant Sergy Harbok, who scored eleven goals for the Russians, who will face the winner of the match Slovenia vs. Egypt in their quarterfinal on Thursday. To reach the eight-final had been the biggest Brazilian success at World Championships already, but they were highly close to reach even more.

The Brazilian defence had perfectly adapted to the Russians. The South-Americans managed to avoid the Russian counter-attacks and stopped the much taller attackers brilliantly. The Europeans were totally surprised by this tactic, played without speed and lacked ideas in attack. Additionally Brazilian goalkeeper Luis Ricardo Nascimento saved a huge number of shots and backed his bravely fighting team.

After the Russians had been away by 14:11 thanks to five strikes of Sergy Gorbok, Brazil found the gaps in the Russian defence to level the result at the break and even go ahead to 17:15 in minute 35. And who thought the more experienced and much more powerful Russians could break the spell easily, was wrong.

Brazil remained on eye-level until the final stages, playing long attacks and waiting patiently for their chances, while the Russians by far did not reach the performing level from the preliminary round. But minute by minute, the South-Americans lost their powers, their batteries were close to zero – and so the concentration decreased. And in total contrast Gorbok took the full command in the Russian team. His eleventh goal for 26:23 seemed to pre-decide the game five minutes before the end. But Brazil did not surrender. Even the red card against Felipe Ribero, who hit the face of the strong Russian goalkeeper Igor Levshin by a penalty shot, did not bring them to the ground. 40 seconds before the end Fernando Pacheco scored the 26:27, and after a Russian time-out the favourite Europeans caused a turnover, which gave Brazil the final chance to equalize – bur Vinicius Teixeira missed the goal.

Jordi Ribera, coach Brazil: I am very sad about the result, as for 60 minutes we did not only show a great fight, but played intelligent and tactical clever and solved all difficult situations. Small errors finally caused the defeat, but the whole tournament gave us a lot of experience.

Felipe Ribero, player Brazil: I am sad about the game, but happy with our performance in Spain in general. We arrived here as team of the second division of the world, but we have made it to the first division. We tried our best, but Russia was too strong in the end.

Oleg Kuleshov, coach Russia: Brazil played a highly fast and efficient handball, we committed too many mistakes, were too nervous and did not use our brains and hands like in the matches before. But I was happy that my team did not break apart in the second half, but scored more efficient.

Timur Dibirov, player Russia: Brazil showed the hardest resistance of all teams we have played by now in Spain. And Brazil forced us to play another handball, not the usual Russian way of playing. But in the end we had more character and forces.