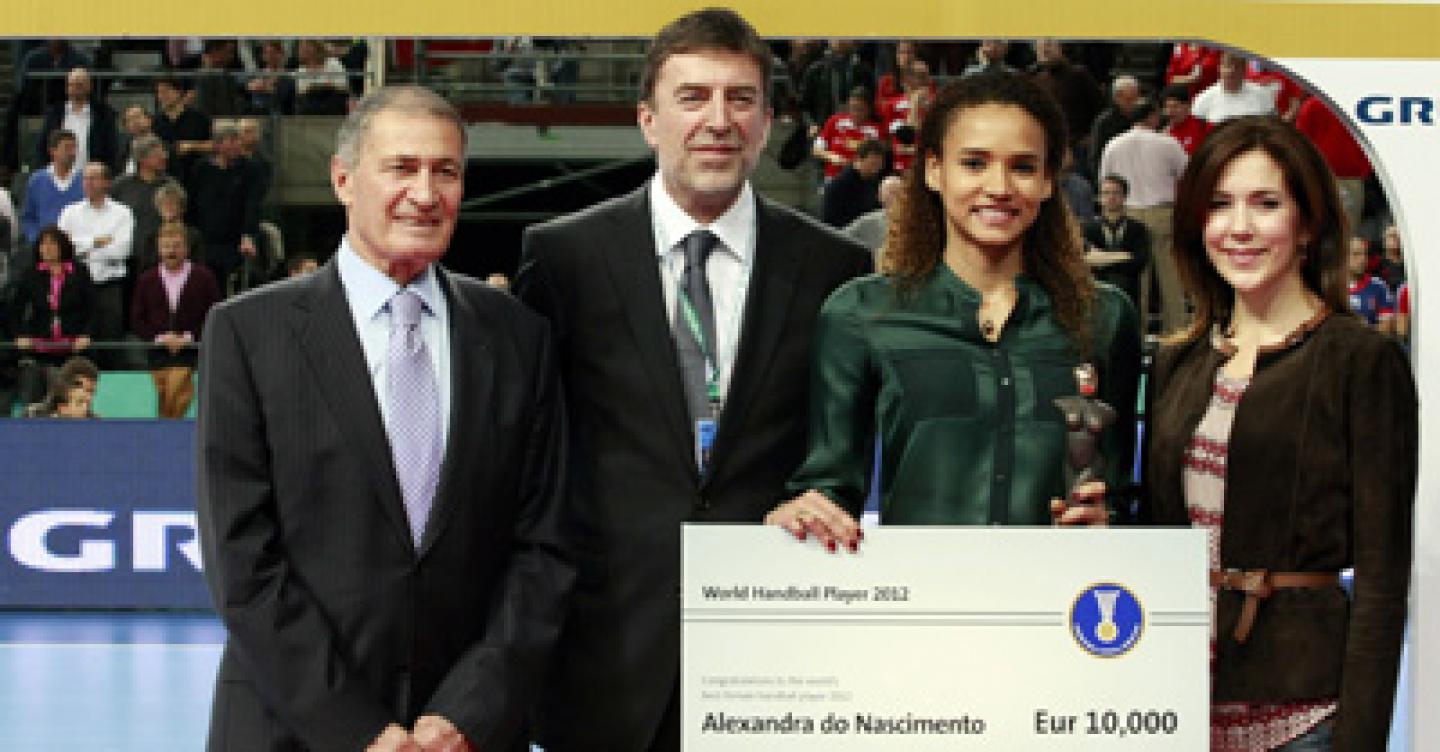 Cheered by more than 15.000 spectators, the GRUNDFOS World Handball Players of the Year 2012 were awarded in Barcelona. IHF President Dr Hassan Moustafa and Kim Klastrup, representative of IHF partner and awarding sponsor GRUNDFOS handed over the trophies to Alexandra do Nascimento (Brazil) and Daniel Narcisse (France) in the halftime break of the World Championship final Spain vs. Denmark in Barcelona. The new GRUNDFOS World Handball Players of the Year did not only receive a memorable trophy, but also a cheque amounting 10.000 Euro, presented by GRUNDFOS.

Right wing Alexandra do Nascimento (playing for Hypo Niederösterreich/Austria on club level) is the first ever Brazilian World Handball Player of the Year and Daniel Narcisse (THW Kiel/Germany) is the sixth Frenchmen to be awarded with this trophy since the start of the voting in 1988.

Fans, media representatives and an expert group of the International Handball Federation had decided this voting – and both male and female decisions were quite close. Alexandra do Nascimento had received 28% of votes to be ahead of Löke and Montenegrin Bojana Popovic (Buducnost Podgorica, 24 % each). Andrea Penezic (Croatia, Krim Mercator Ljubljana/Slovenia) and Katarina Bulatovic (Montenegro, Oltchim Valcea/Romania) each earned 12% of votes to both rank fourth.
Daniel Narcisse had gained 25% of votes to his forerunner outclass Mikkel Hansen (Denmark, Paris Handball, 21%). Filip Jicha (Czech Republic, THW Kiel/Germany), Kim Andersson (Sweden, KIF Kolding/Denmark) and Julen Aguinagalde (Spain, Atletico Madrid/Spain) shared the third rank with 18% each.

Hansen and Aguinagalde faced in the final in Barcelona for their first ever World Championship gold medals in their life. And both were awarded members of the World Championship 2013 All-Star Team. Narcisse had dreamt to be in the final to continue the series of success with the French team in Spain, but they were eliminated by bronze medallist Croatia in the quarter-final.

But on Sunday 27 January, Narcisse - and do Nascimento - were in the spotlight, enjoying the feeling to be best of the world.

All GRUNDFOS World Handball Players of the Year: