"Actually, I knew to be top scorer I needed to score 20 in the last game and I made it," she said. "I'm really, really happy, I am very proud of my team. We fought back in the second half (of the final). The team spirit is really good.

"We are really close together, we are all friends with each other," she added about her teammates, "Next year we go to the senior teams, we'll train and maybe play some tournaments." 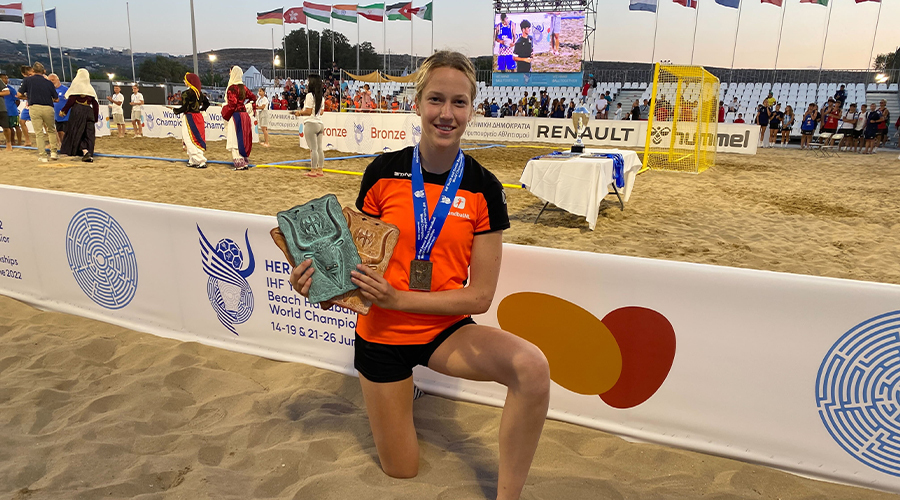 Five national teams are represented among the individual positions, plus a sixth team that has received the Fair Play Award.

"We don't have words to define it," said Spain's Maria Laguna Contreras, who scored the championship-winning point.

"I was sure that their defender was going to leave the goal. She was trying this movement a lot of times. I had confidence my shot would go in."

"We make a perfect championship," she said. "We lost just one game, against Hungary and now I feel very very happy and want to enjoy the time."

And what about those 30 points scored by Spain in the first period and Netherlands in the second, the first-time ever in a world championship final this number has been reached.

"The style of play of Spain and Netherlands is to push the attack before the defence."

All it needed was a single point in the end. After the shoot-out entered the sixth round following two misses by both teams - including a technical fault from Spain with their very first shot - it was down to Maria Laguna Contreras who saw the opportunity of an open goal and shot full-court into an empty net to secure gold.

Now Netherlands have scored 30 points, wow. They won the second period 30:22 and really want this gold.

Since the senior IHF Beach Handball World Championships started in 2004 and the youth editions in 2017, 30 points have never-ever been scored in a final.

The closest a team came before? Well, it was Spain's youth men when they scored 27 in the first period against Italy in the 2017 IHF Men's Youth Beach Handball Championship final.

In the senior events, Croatia scored 26 points in their second period win against Brazil in the men's senior final back in 2014.

Spain have just scored 30 points in a world championship final period. They are completely in control against Netherlands who don't know what's hit them. Can they come back?

Spain and Netherlands are ready, let's go for gold!

“I have no words to describe this situation but this is incredible. I feel relief, happiness and, stress of course, but I'm very happy,” she said.

“It was our second game against Hungary (they played in the preliminary round and Hungary won 2:0) and that's why we know exactly what the girls from Hungary are playing,” explained Celka. “We were prepared for that and our game showed that Hungary could be beaten.”

Yesterday, Poland lost their semi-final clash against Spain via a shoot-out too, something which Celka said they had worked on overnight.

“Our player who blocks everyone (Paulina Kuzminska) got a red card so we had to come out with a different solution,” she said. “But she was with us today and she did the best she can do.

“It's amazing (to come away with a medal),” she added. “Our families will be very proud of us and the whole country too.”

Poland have beaten Hungary 7:2 in a shoot-out. They raced to a 6:0 lead after blocking two Hungary attempts.

With the score at 6:2 and just two shots left each, Poland's Marta Celka knew if she scored her side would be taking a medal home.

She got the single point needed and they were a bit happy to say the least. 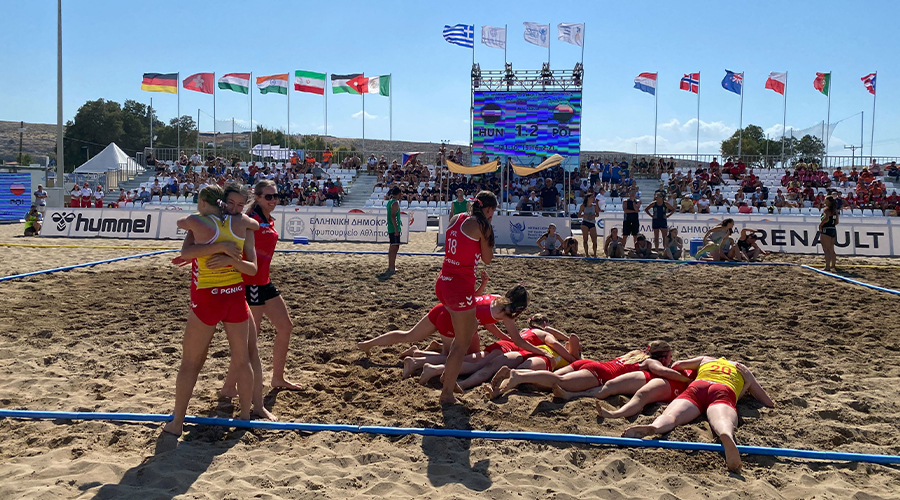 Before the bronze medal match today they had lost just once in Greece, in the semi-finals against Netherlands.

The second period has finished 16:15 to Poland, they squeezed past Hungary after their opponents ran out of time to launch a last-second attack.

After winning the ball at the start of the match, Poland led the entire period, going 10:4 up at one point, but Hungary are strong and came back, but could not quite catch up.

Watched by nearly all remaining teams here in Heraklion, Hungary and Poland have just ended the first period.

After five minutes, Hungary were 8:4 up, but a number of misplaced passes and turnovers from Poland meant the Hungarians raced to a nine-point lead (15:6) prompting a Polish time out with just under three minutes remaining.

This did little to address the slide for them as Hungary ended the opening 10 minutes in style, with a double in-flight set of passes before the ball was slapped in, literally, by Amina Daniella Kazeem for the single point.

Can Poland come back?

15:57 EEST You know it's serious when you hear your national anthem

Medal matches mean teams get to hear their national anthems before games and see their flags at close quarters, with volunteers holding them on the sand.

All week they have just started games without the anthems, now they have them.

A nicely, timely, reminder (not that either team needed it) that this match is important.

15:54 EEST Hungary and Poland on court

The bronze medal match is six minutes away - you can watch it live on the IHF Competitions YouTube channel now. 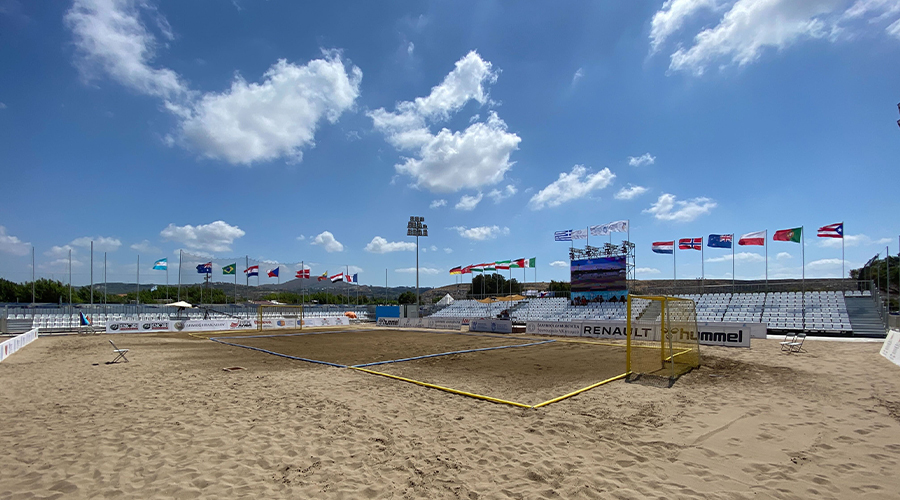 Just two games left and they both feature medals. See you in three hours.

The South and Central America champions Argentina have finished fifth thanks to a shoot-out win against France.

France missed two shots in a row, including one goalkeeper overthrow as the South Americans win by this format again.

Romania coach Florin Ciupitu told us earlier this week he wanted to win the 9-16 placement round and they did - their 2-1, 10:8 shoot-out win over Ukraine coming after the Ukrainians had agonisingly hit the crossbar with their fifth and last shot.

Fellow South Americans Uruguay wrapped up their campaign with a 2-0 win over India to finish 13th.

Two shoot-outs have just concluded on adjoining courts. On court 2 Thailand beat their first European opponents of Greece 2022, defeating the hosts 9:8 in the shoot-off.

Panwasa Changtom was the key again, the Thai goalkeeper blocking Greece's third attempt after scoring her country's third herself.

Germany saved Brazil's fourth attempt and at 8:6 ahead with one shot remaining for the South Americans, Germany's Laila Ihlefeldt got the single-pointer, ending in some discomfort following an innocent clash with the Brazilian goalkeeper.

Brazil vs Germany and Greece vs Thailand are going to shoot-outs, while Puerto Rico in the very last seconds, take the second period against Hong Kong for the double.

They had beaten them in their preliminary group match earlier this week.

We have three big games now with Brazil and Germany going head-to-head for 7/8 place, the host nation ending their campaign against Thailand (11/12) and Hong Kong looking to turn around their preliminary group loss against Puerto Rico (15/16).

Five days of action are behind us, which can only mean: it's time for the medals!

It will be all-European clashes later in the day for the medals with Hungary vs Poland playing for bronze and Netherlands vs Spain facing each other for gold, while the places 5 to 16 are decided in the morning at 10:20 EEST and 12:00 EEST.

Let the games begin as there's only thing that is sure for today: we will have a brand new world champion.

For more info on the matches today, read our preview.