A chance for everybody: ”Together League” helps Switzerland stand out

Handball is for everyone. From baby handball to wheelchair handball and walking handball, the sport can be adapted for all needs and ages, a thing that has been proven time and time again in different countries on all continents.

A new branch of the sport is currently developing in Switzerland, as the vision of the Swiss Handball Federation (SHV) is clear to enable as many people as possible to start playing handball, a sport that has been getting more and more popular in the Alpine country.

"Children, young people and adults should have easy access to sports. They feel that they belong, are accepted and valued, regardless of their age or condition," according to the SHV, which has now created the "Together League", a competition with five teams in a joint partnership with Special Olympics Switzerland.

Special Olympics is the world's largest sports organization for children and adults with intellectual disabilities and physical disabilities, providing year-round training and activities to 5 million participants and Unified Sports partners in 172 countries.

In the "Together League", people with disabilities can participate in competitions, with four teams from Switzerland – ATV/KV Basel, HC Winterthur, TV-Unterstrass and SV Fides St. Gallen - and one team from Germany – Hochrhein – joining the tournament.

The idea was born three years ago when Special Olympics Switzerland joined forces with a Swiss handball club – TV-Unterstrass – offering handball classes and training for people with disabilities through the Unified programme. The sisters Elena and Maya Röthlisberger took up the programme and started teaching handball with TV Unterstrass and ATV/KV Basel, as two other teams joined the programme.

The first steps were made in June 2022, when under the motto "St. Gallen with everyone", the National Games of the Special Olympics movement were held in St. Gallen from 16-19 June, with handball being on display for the first time as a demonstration sport.

The handball demonstration tournament showed that handball is a very suitable sport for people with an intellectual impairment. Special Olympics Switzerland supported the handball clubs with their know-how on the way to inclusive teams.

The next part of establishing the sport in Switzerland was creating the "Together League", in which five teams participate. The first round of the competition was a true success, with all the sides meeting in Winterthur on Sunday, 20 November 2022.

The participants had fun and had the chance to meet one of their idols, legendary Switzerland centre back Andy Schmid, who supervised the games and inspired the players on the court.

Schmid, the all-time second-best goal scorer for Switzerland, was impressed by what he witnessed and vowed to come back during other rounds of the "Together League". "I was definitely not the last time with you – keep it up," said Schmid, according to the official website of the SHV. 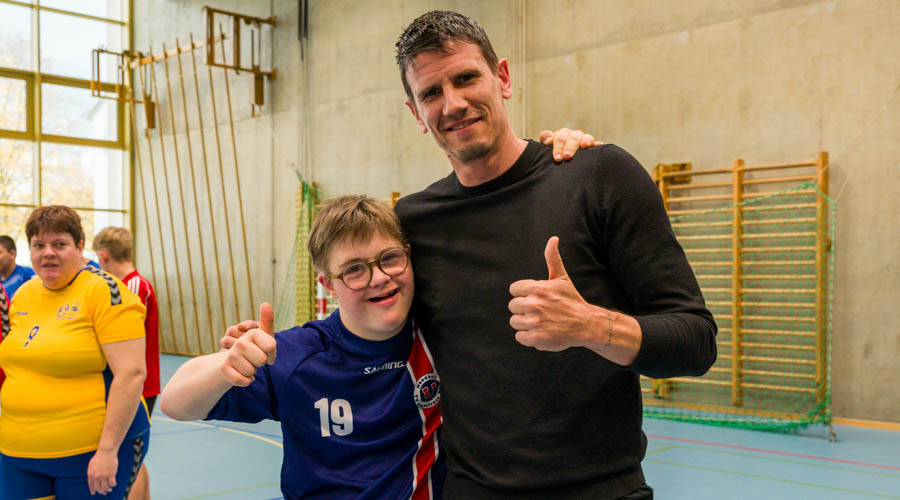 The vision of SHV is to make the competition inclusive for everybody, with its general assembly deciding to introduce a Special Handball License for the next season for teams who want to participate in the "Together League".

"The SHV is a pioneer and continues to support the planning to develop the Together League. This is supported by Special Olympics with their sports philosophy that makes it possible for everyone to participate and succeed," said Dehlia Dünser, a spokesperson for the SHV.

Until then, three more rounds of the "Together League" are scheduled for 2023, one in January in Zurich, another in March in Basel and one in June in St. Gallen.