Iran cause sensation on home sand

After their women’s youth side had won the 2022 AHF Women’s Asian Youth Championship on Friday to become the first-ever handball side in either gender at any level to take a continental gold, the two beach teams added to that glory, taking top spots in their respective championships held side-by-side in the capital city of the Islamic Republic of Iran, Tehran.

Both beach handball championships were playing in a round-robin format, with Iran’s senior men’s side having it all to play for on the final day. Previous results meaning it all went down to the very last match of the championship – match number 15.

A win for Qatar would have seen them crowned champions for the sixth consecutive event and Iran, Oman and Vietnam all tied on points with maths needed to determine second place – an important position, with the top two spots qualifying for the 2022 IHF Men’s Beach Handball Championship in Greece this June.

In the end, Iran caused a major upset, taking a shoot-out 12:10 to beat Qatar 2-1 thanks to a save by Iranian goalkeeper Abbas Asad Zadeh from Qatar’s Amir Debguir. Oman, who have finished as runners-up to Qatar for the past five editions could only manage fourth place, beaten by Vietnam on the head-to-head. Iran had played Qatar twice in pre-championship warm-up games.

“Qatar has won Asian gold for 10 years and has been the undisputed champion of Asia in the last five editions,” explained Iran coach Seyed Hassan Eftekhari to IRIHF.ir.

“It is a very big team in the world, but we were able to win against this powerful team. Iran's beach handball team has achieved this with many years of hard work with the handball federation, the beach handball association and all the coaches and workers in this field. I am happy that the championship remains in Iran."

Iran won all their games in the youth championship to take the title and book their ticket to the 2022 IHF Men’s Beach Handball Youth (U18) World Championship to be held in Greece this summer, but it was tight for silver and bronze – the last two spots for a Greek ticket.

Jordan, Pakistan and Qatar were all tied on six points and all had beaten each other, but Pakistan missed out on goal difference to finish fourth. 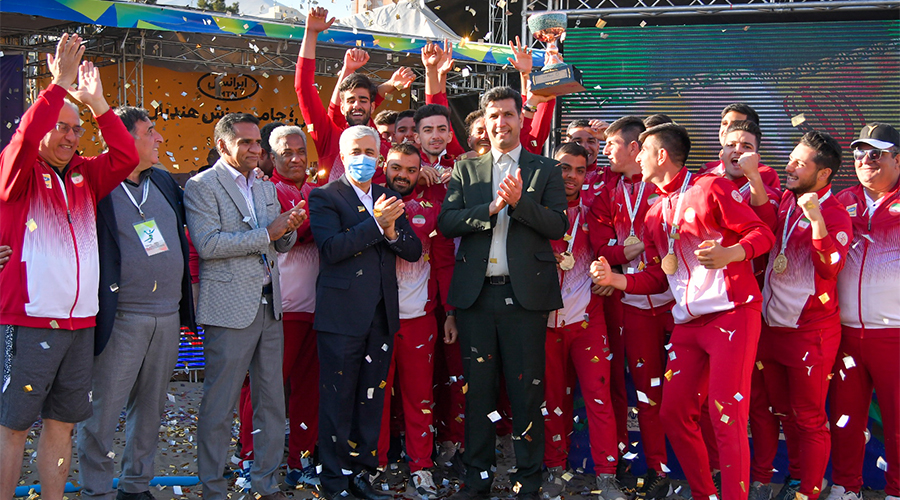 Photos, official match reports and results of the 2022 AHF Men’s Asian Beach Handball Championship can be found on the official mini-site on the Asian Handball Federation website, with the youth championship info here.