Handball has featured once again at the Summer Deaflympics, being part of the 24th edition of the competition, which took place in Caxias do Sul, Brazil, one year later than originally scheduled due to the COVID-19 pandemic.

13 teams – eight men’s and five women’s teams – took part in the competition, after Cameroon and Venezuela’s men teams withdrew prior to the start of the Summer Deaflympics 2021, thus losing all of their games in the group phase.

It was Croatia in the men’s tournament and Denmark in the women’s tournament who sealed the gold medals, as the handball competitions took place between 2 and 14 May in Caixas do Sul. The two sides were the only undefeated ones at the end at the Summer Deaflympics 2021.

Croatia, the all-time leader in the medal table at the Summer Deaflympics, had a perfect tournament, securing their fifth gold medal without dropping a game. The competition started with a bang for them, with a clear 35:20 over the then reigning champions Turkey, as wins against Denmark, 40:11, and Ghana, 41:13, quickly followed.

Securing the first place in Group B with a goal difference of +82, Croatia were hot favourites for the semi-finals, where they met rivals Serbia. A 32:18 win was the perfect preparation to set up a final against Germany, the other team riding a five-game winning streak into the last act of the competition.

However, Germany were no match for the flawless Croatia side, who clinched another outstanding win, 32:21, sealing their eighth medal at the Summer Deaflympics – five gold, one silver and three bronze.

This was also the first gold medal for Croatia since Sofia 2013, when they beat Serbia in the final.

The podium in the men’s competition was completed by Serbia, who won against Turkey 23:17 in the bronze-medal match.

In the women’s tournament, the first one organised at the Summer Deaflympics since Rome 2001, only five teams took part in a round-robin format, with the winner being decided after a knock-out phase.

The group was won by Denmark, who dominated their opponents and sealed the first place with four wins out of four games, including a narrow 18:16 one against Turkey, who finished second.

With Argentina, who scored only 19 goals in four games, eliminated, the semi-finals pitted Kenya against Denmark, while Turkey faced hosts Brazil.

There were no issues for the favourites, with Denmark taking a 31:8 win against Kenya, while Turkey dominated Brazil and clinched a 37:17 victory to set up a spirited final.

Indeed, it was a game on knife’s edge, but eventually Denmark sealed a 16:15 win against Turkey, claiming a superb gold medal. Hosts Brazil took the bronze medal, winning the clash against Kenya, 24:15. 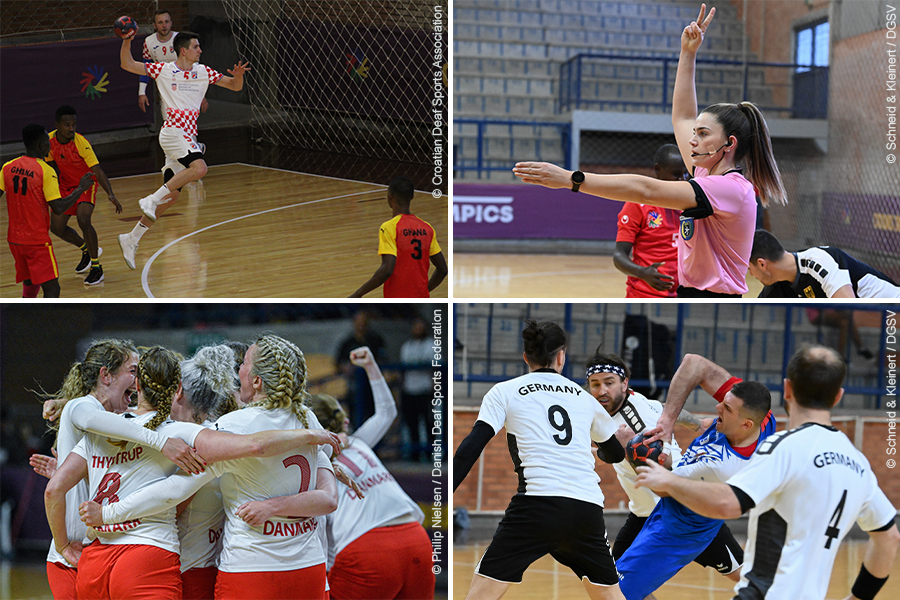 The next edition of the Summer Deaflympics will take place in Japan in 2025.

Visit the official event website to learn more about the 24th Summer Deaflympics in Brazil.