The groups are now known for the 24th edition of the CAHB African Women’s Championship which is set to take place in Yaoundé, Cameroon in June after the draw was held at the headquarters of Cameroon Radio Television (CRTV) last week (1 April).

Broadcast live on CRTV Sports, the draw was part of a spectacular event ceremony which featured a variety of entertainment rich in Cameroonian culture.

Following the conclusion of the singing, dancing and much more, a number of VIP speeches followed including those by President of the African Handball Confederation (CAHB), Dr Mansourou Aremou, President of the Cameroon Handball Federation, Lippert Daniel Raymond Mbita Mvaebeme, and the Cameroonian Minister of Sports and Physical Education, Narcisse Mouelle Kombi.

The championship was originally scheduled to be held last December but was postponed due to restrictions in place around the continent due to COVID-19 and will now take place from 8 to 18 June. All games will be held at the Yaoundé Multipurpose Sports Complex. Cameroon 2021 will be the first time in the history of the African women’s senior championship, which dates back to 1974, that 12 teams will participate and it also represents the first time ever that the central African country has hosted a continental championship at any level in either gender.

Cape Verde, Kenya and Madagascar will all be appearing at their first-ever CAHB Women's African Championship, with Cameroon 2021 also marking the debut appearance for Madagascar at any level or in either gender in any CAHB continental championship, although both the men (1987) and men and women's sides (2011), have appeared less than a handful of times at the African Games.

“This means a lot to our female players and they are still in high spirits, despite the onset of COVID-19 pandemic,” said Caroline Nyadiero, Kenya Handball Federation Executive Board member, to ihf.info about appearing at their debut senior championship.

“This championship will provide them with exposure and publicity which will boost their morale and I urge all young players – in both indoor and beach – to follow in their footsteps, come out and let their stars shine. To us, the sky is the limit.”

The opening match will see host nation Cameroon, who won bronze in the 2016 edition and finished fourth in 2018, face debutants Kenya. The current title-holders are Angola who beat Senegal in the final last time out, at Congo 2018. The draw came in the middle of a week-long (28 March to 3 April) inspection of the championship infrastructure in Yaoundé led by President Aremou, where playing, training and accommodation venues were inspected as well as the health protocols which will be in place. Cameroon 2021 will be the first CAHB continental event to take place during COVID-19.

Playing format
The top two teams in each of the three preliminary groups plus the two best third-placed teams will qualify for the quarter-finals, which will then be followed by the semi-finals, bronze- and gold-medal matches.

Spain 2021
The top four ranked teams in Cameroon will automatically qualify for the 2021 IHF Women’s World Championship in Spain in December.

Moroccan signing
In other CAHB news, a signing ceremony of the ‘Memorandum of Understanding’ (MOU) for the hosting of the 37th CAHB Men’s and Women’s African Cup Winning Clubs' Championship was held in Casablanca last month.

The MOU was signed in the presence of Dr Aremou and El Adli Hanafi, President of the Royal Moroccan Handball Federation and came after the championship was moved from neighbouring Algeria due to COVID-19 restrictions. 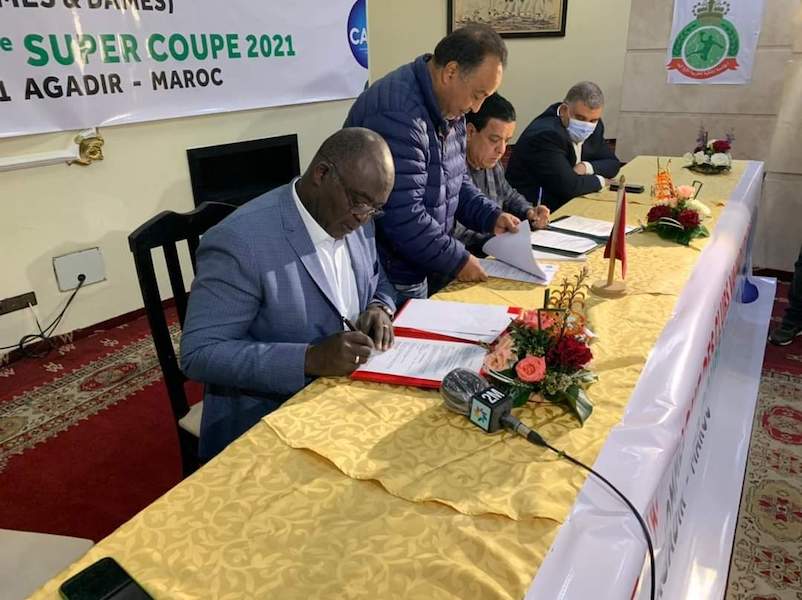