The EHF FINAL4 card is now complete, after the quarter-finals phase of the EHF Champions League Women concluded this weekend with several high-profile clashes that saw powerhouses dropping out of the chase for the title.

Only two sides from the four that qualified this season – Győri Audi ETO KC and Vipers Kristiansand – have won the trophy before and they will face strong challengers as Team Esbjerg and Metz Handball will try to upset them in the business end of the season, which will take place on 4 and 5 June in Budapest.

With Metz Handball having already sealed their EHF FINAL4 berth with a win against BV Borussia 09 Dortmund in the play-offs as Russian side Rostov-Don were eliminated from contention, only three quarter-finals were played in the last two weeks.

The most balanced double-header was the one pitting Team Esbjerg and CSM Bucuresti together. The first leg, played in the Romanian capital, ended in a heartbreaking fashion for CSM, as they conceded a last-second goal from Norwegian line player Vilde Ingstad, which resulted in Esbjerg taking a 26:25 win.

In the second leg, played in Esbjerg on Sunday, the Danish powerhouse, who was undefeated this season at home, winning six games and drawing another one, had a mountain to climb, after CSM led by as many as three goals in the first half.

Powered by an outstanding outing from Norwegian world champion Kristine Breistol, who scored nine goals, Esbjerg bounced back and led themselves by three goals close towards the end of the game – but the deadlock was not broken, with the match finishing in a 27:27 draw.

With a dramatic 53:52 aggregate win, Esbjerg sealed their maiden EHF FINAL4 spot, becoming the first Danish side to proceed to Budapest since FC Midtjylland in the 2013/14 season.

Before the second leg of the clash between Győri Audi ETO KC and Brest Bretagne Handball, five of the last six games in which the two teams faced off ended in stalemates, including the first leg, 21:21.

Krim, who were looking for their first semi-finals berth since the 2012/13 season, had little to no chance, conceding a 65:49 aggregate loss, while Vipers became the first Norwegian team to clinch three consecutive EHF FINAL4 berths.

In total, three of the four teams qualified directly for the quarter-finals by finishing on the top two places in each group in the preliminary round have made the EHF FINAL4, with Metz completing the card by their walkover against Rostov-Don.

In the top scorer standings, CSM left back Cristina Neagu leads with 110 goals scored throughout the season, 14 goals more than Vipers right back Nora Mørk and 23 goals more than Brest’s Helene Fauske Gigstad. If Neagu wins the top scorer standings, she would become only the third player in history to clinch the award three times, after Nataliya Derepasko and Natalia Morskova. 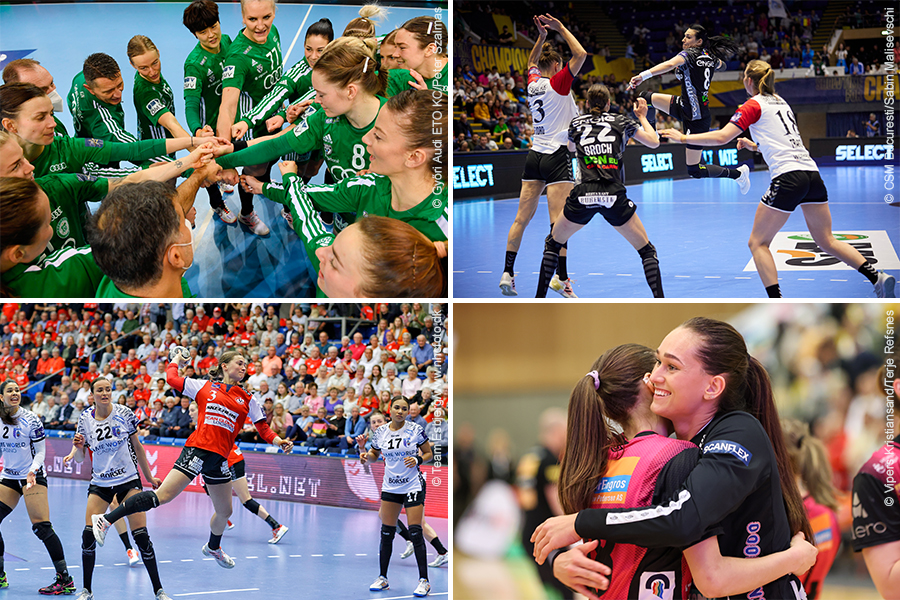