Another important step towards the 25th IHF Women’s World Championship in Spain was made on Thursday evening, as Castelló hosted a beautiful draw event on the Plaza Mayor de Castelló to decide the eight preliminary round groups of the women’s flagship event.

Castelló is considered as a city committed to promoting women's sport as the city’s mayoress Amparo Marco highlighted before the event: “We continue working to support women’s sport and make the role of women visible, and hosting the World Championship is an example of this.”

Before Mayoress Marco took the floor to open the draw event on behalf of all host cities, however, it was lynx Lola, the mascot of Spain 2021, who set the mood, and the host city Castelló was introduced.

After the opening speech, the remaining three host cities – Granollers, Llíria and Torrevieja – were presented, interspersed with a speech from President of the Spanish Olympic Committee Alejandro Blanco as well as presentations of the non-profit organisation Fundación Trinidad Alfonso and Lola, the mascot.

With the beginning of the actual draw, which started with information on the draw procedure, Per Bertelsen, Chairman of the IHF Commission of Organising and Competitions, and Patric Strub, IHF Competitions Director, were welcomed to the stage.

Assisting with the draw were representatives of the host cities on the one hand, and former and current players on the other. The Mayor of Llíria, Joanma Miguel, and Cristina Gómez, who took part in the 1992 and 2004 Olympic Games, were then invited to the stage to assist with the draw of the eight teams in pot 3.

For pot 2, Josep Mayoral, Mayor of Granollers, and Susana Pareja, also a former Olympian (Athens 2004) and international player for 12 years, were welcomed to the stage.

After the teams of the pots 4, 3 and 2 had been drawn into their respective groups, Spain were given a few minutes to choose their group, as is their prerogative as hosts. In the end, they selected Group H.

Then, Mayoress Marco and Paula Arcos, the youngest of the ‘Guerreras’, were invited to come to the stage to assist with the draw of the remaining teams in pot 1. Arcos, the 19-year-old right back, had her first international match in the senior squad in April but was already part of the team who played at the Olympic Games Tokyo 2020.

The final draw result is as follows:

*South and Central America
**North America and the Caribbean

As several qualification events still have to be played due to the COVID-19 pandemic, not all teams of the groups are known but we can already see familiar foes facing each other.

Group A sees a rematch of the 2019 IHF Women’s World Championship, Angola versus Slovenia. Two years ago, Angola claimed a commanding 33:24 win.

In Group B, the Russian Handball Federation will face Serbia again after they beat them 29:24 at the Tokyo Handball Qualification 2020 last March. Also in March, European champions and Tokyo 2020 bronze medallists Norway defeated Romania – also 29:24 – and they will play each other again in Group C.

Tunisia and Congo, who are pitted against each other in Group F, met only recently as they played the bronze-medal match of the African Women’s Championship in June, which was won by Tunisia 22:17.

After the groups were drawn, President of the Royal Spanish Handball Federation Francisco Blazquez was welcomed to the stage, before IHF President Dr Hassan Moustafa concluded the event, thanking everyone, and in particular the Spanish government, for their efforts to stage the event in these difficult circumstances. 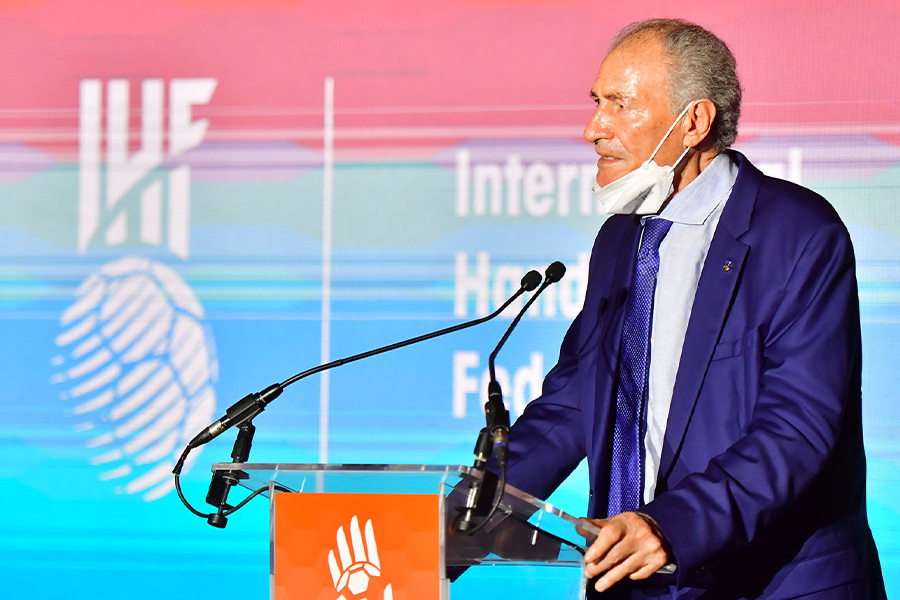 After Dr Moustafa handed a silver medal as a special gift to Francisco Blazquez, a firework lit up the sky over Castelló to end a wonderful evening.

The draw event was held in accordance with all regulations and health recommendations regarding COVID-19.