From 8 to 15 May, Maldives’ capital Malé hosted an Olympic Solidarity Technical Course for Coaches, which provided an IHF C-Licence certificate for 15 successful participants.

A mix of 22 men and women attended the course, which was delivered by IHF Commission of Coaching and Methods (CCM) Lecturer Peter Kovacs and featured topics and curricula such as: selection, beginners training, juniors training, high level training, attack/counter-attack/organised attack, defence, goalkeepers, planning for training, weight training and much more.

“The most important lesson is that emerging countries need serious support, like this Olympic Solidarity course, from the IHF. Another lesson that can be taken from this course is that we can find talented coaches in small markets,” said IHF Lecturer Kovacs.

Following the course, practical and written tests took place to measure the ability of each participant, as 15 of the 22 participants secured the IHF C Licence.

“Emerging nations like Maldives have to take a step-by-step approach. First, the number of players, referees, coaches and fans has to be increased. Also, more international games need to be played, but what they need the most is an arena, because handball is only played in open air now,” added Kovacs. 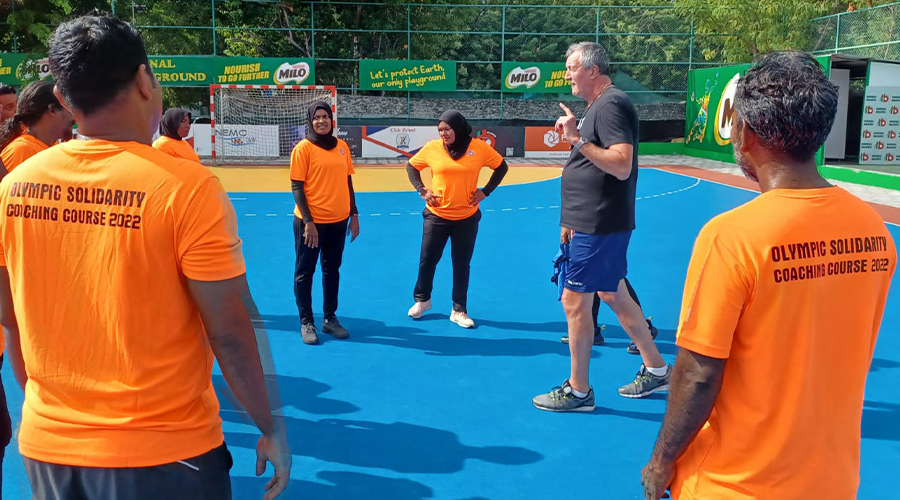 Olympic Solidarity’s mission is to help National Olympic Committees (NOCs) develop and strengthen their structures, support their athletes, coaches and administrators, and promote the Olympic values through targeted programmes.

These programmes enable them to not only consolidate their position within the Olympic Movement and their own national sports structures, but also to increase their autonomy and independence. With better support, the NOCs are better able to carry out their responsibilities.