The nurses, teachers and school principals who fulfilled their dreams

When Puerto Rico’s women were crowned North America and the Caribbean champions for the second time this August, they knew they had also sealed their second berth for the IHF Women’s World Championship.

While winning against the United States, Mexico and especially against Greenland in the final (34:24) gave the Puerto Rican side an amazing feeling, they knew that Spain 2021 will be a huge challenge, after being drawn in Group D against reigning world champions the Netherlands, another European powerhouse with Sweden and fellow developing nation, Uzbekistan.

But coach Camilo Estevez believed in his team.

“I have always talked about inclusion in all aspects of life. Let’s take music, for example. How would the world look like if only the best seven or eight singers were allowed to play?

“Why should handball be different from other areas of our life? I respect the best teams in the world, but only playing against each other would be quite boring, even for them,” said Estevez to ihf.info.

Six years ago, when Puerto Rico first took the court at the IHF Women’s World Championship, at Denmark 2015, they finished 20th with a -152 goal difference. Their only win in seven games came in the preliminary round against Kazakhstan, 30:27.

They repeated the feature at Spain 2021 against another developing Asian team, Uzbekistan, as they finished the preliminary round with a convincing 30:24 win, which counts now as their biggest at the women’s flagship event.

“I think our team developed in the last years and this is only because we played in that event and showcased handball in our community. Men’s handball is probably more developed in Puerto Rico, I think the balance between men and women is 60% to 40%, but we are really doing the best we can to be better,” added Estevez, who also led the Puerto Rico women’s senior national team at Denmark 2015.

For an emerging side, games at the highest level are surely a blessing, because players are put into difficult situations and they can learn from the best in a controlled environment.

Just watching clips from other games and not feeling the sheer talent from their opponents cannot develop a player, from Estevez’s perspective. Therefore, losses like the ones against the Netherlands (15:55) and Sweden (10:48) can only help the Puerto Rico team grow.

“It is not difficult to motivate my team after this type of matches, because we know where we are and where our opponents are. So they are always trying to be better, striving to improve.

“Tactically, when you see these fast breaks from Norway, the Netherlands or Sweden, everything falls so nice into place. They are, literally, machines, scoring whenever they want. So I always tell my players to enjoy the games, but also learn something from them. An important thing is to run back after you lost the ball and follow some patterns. This will definitely help for the games in our Confederation,” said Estevez.

With a small pool of players to pick from, just a tad over 40 for the senior team level, nine of the 16 players that took part in Denmark 2015 are still in the squad for this tournament, as Puerto Rico brought to the table a squad that is on average 27.7 years old. Yet, bringing them together is difficult, as the Puerto Rican Olympic Committee and the Puerto Rican Government chimed in to make it happen. The training arenas in Puerto Rico, where the women’s senior national team prepared for the IHF Women’s World Championship were rented free of charge, while a large chunk of the players are helped financially.

Plenty of them are not professional handball players, with some of them working as nurses, teachers and even as school principals, to earn a living besides handball. Another three – right wing Jailene Maldonado, centre back Sheila Hiraldo and line player Ciris Garcia – are plying their trade in the Spanish league. Each of the three players also receives a basic salary from the Puerto Rican authorities, besides what they earn at their clubs, to help them, and the national team, improve.

“They have plenty of experience, they play against better players and this rubs off on the other players too, it is pretty clear, once you go into training or to games with them in the squad. Therefore, it is very helpful,” added Estevez.

With the maiden 32-team IHF Women’s World Championship line-up, Puerto Rico knew they had an outside chance to progress from the preliminary round for the first time in history. When the Puerto Rico side saw the group they will take part in, the intensity grew: the Netherlands, Sweden and Uzbekistan.

And by the time their last game of the preliminary round against Uzbekistan, in the Palacio de los Deportes de Torrevieja, finished, they had already spent every ounce of energy to fulfil it. It was not the prettiest of wins, but they controlled the game from start to finish, were relentless in defence, while the attack was held together by captain Nathalys Ceballos and centre back Sheila Hiraldo, who combined for 16 goals.

When the final whistle blew, they knew they probably secured one of the biggest, if not the biggest win of their lives. The scoreboard was right there and they could not believe their eyes: the 30:24 win meant that Puerto Rico progressed to the top 24 teams in the world and directly into the main round at Spain 2021.

“It was an emotional moment and I was really grateful to be here and to coach this team, because it was a big challenge from start to finish. We proved that handball exists in Puerto Rico and that we can also win games on the biggest of stages.

“Therefore, I think the IHF did not make a mistake when they opened the door to other teams, because this is the only way we can develop and become even better,” said Estevez.

Despite recording the second-worst goal difference in the preliminary round, -72, Puerto Rico have a chance to even top their finish at Denmark 2015, provided they win against another Asian side, Kazakhstan, which they beat six years ago, 30:27.

Whether that happens or not, Estevez is sure of one thing.

“When we get back to our Confederation and play our local rivals, we will surely apply the things we have learnt here, at Spain 2021. And that is already a win in itself,” concluded the coach who has been spending his last 22 years developing handball in Puerto Rico. 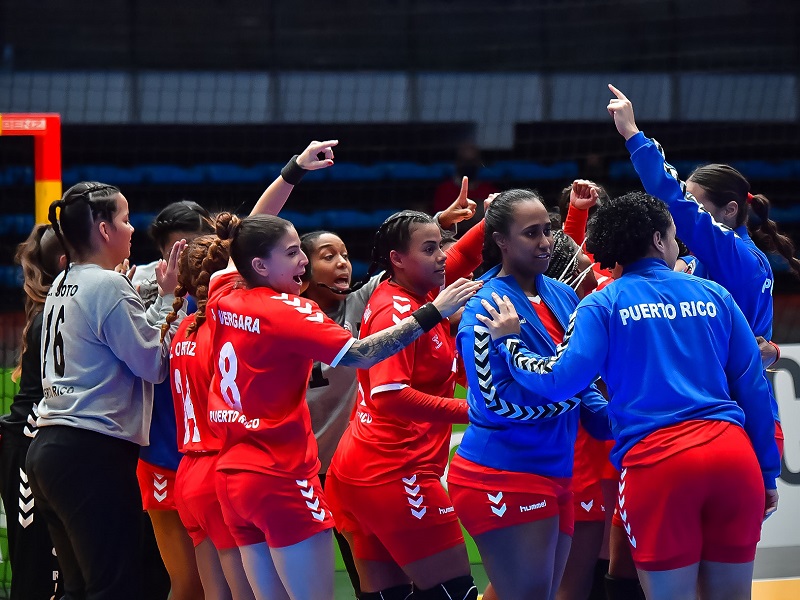