Lucky number 2: Schanssema sacrifices summer for glory with the Netherlands

What were your priorities for the summer when you were a teenager? Spending as much time with your friends, just chilling on some beach or sleeping until noon? Those might be the correct answers for many.

But for Bianca Schanssema, the summer of 2022 will be forever etched in her memory. She gave it all away for the chance of fulfilling the dream of becoming a professional handball player and became an integral part of Netherlands’ successful summer in two younger-age category tournaments.

First, Schanssema took part in the 2022 IHF Women’s Junior (U20) World Championship, where the Netherlands side secured bronze with a stellar performance. In that competition, which took place at the end of June and in the first week of July, the goalkeeper saved 56 shots, ranking 14th in the tournament in terms of number of saves.

Just one month later, the 17-year-old Dutch player is starring at the 2022 IHF Women’s Youth (U18) World Championship, where the Netherlands have reached the semi-finals once again.

And sure enough, Schanssema saved another 53 shots so far, for a 33.1% saving efficiency, ranking 10th in the number of saves in the competition, with a chance of breaking into the top five with some good performances in the last two matches.

“I am very satisfied with my performances and I would not change anything. I could have been on a beach in Spain, just relaxing, but I love handball and this is my life now,” says Schanssema, just a few moments after she sealed the semi-final berth with a nail-biting 27:26 win against Iceland in the quarter-finals at North Macedonia 2022.

While it might have been a busy summer for the teenage goalkeeper, with 14 games at the highest level until now, it does not show on the court. She is still a menace between the posts, trying to help her team get better results. 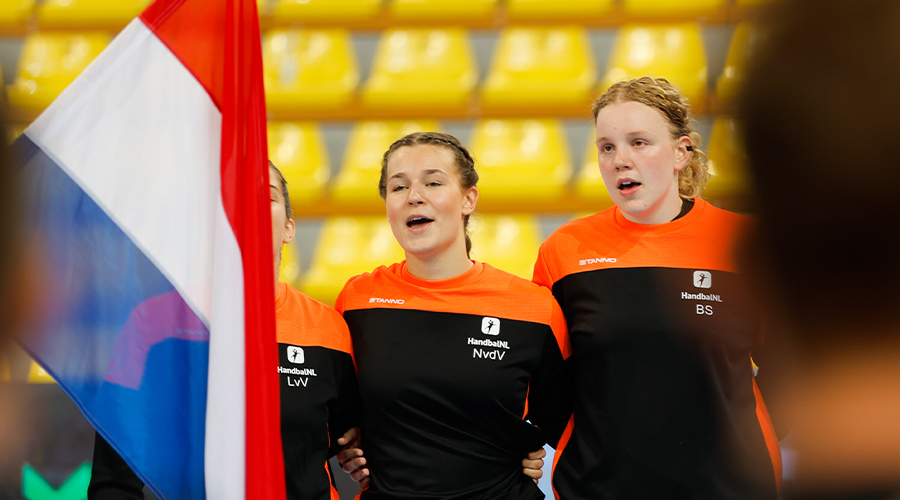 With seven saves throughout the match against Iceland – which might not seem much at first glance – she really put a dent into the opponent’s challenge for a maiden semi-final berth at the IHF Women’s Youth World Championship.

“I learnt a lot during the previous tournament, with players who had more experience. Therefore, it really paid off. It was a very tough game against Iceland, it was not an easy win for us, but this is what makes it even sweeter,” adds Schanssema.

Facing Denmark in the semi-finals, the team who won the largest number of medals in the history of the event, will surely be difficult for the Netherlands, who faces an even tougher match, as they lost a star player due to injury.

Centre back Jalisha Loy was stretchered off in the 22nd minute and will miss the last two games in the event, but Schanssema hopes that Loy’s loss will motivate the team even further.

“We want to win all the games here, a medal would be amazing for us and for the Dutch handball. The tournament has been hard, so I think we deserve it,” adds the 17-year-old goalkeeper.

The Netherlands are the only team who are not entering the semi-finals on a six-game winning streak. Instead, they had to sweat to get to this phase of the competition, after making some missteps at North Macedonia 2022.

First, they saved a 29:29 draw after being four goals down against Romania in the last match of the preliminary round. Then, a loss against the Republic of Korea, another semi-finalist, 24:26, put another dent in their challenge.

However, when Romania lost both matches against Korea and Germany in the main round, the Netherlands celebrated their quarter-final qualification for the fourth time in six editions they played in at the IHF Women’s Youth World Championship.

Their only medal came in 2010, with a generation that boasted Lois Abbingh, Estavana Polman, Tess Wester and Angela Malestein, all core members of the team that secured the gold medal at the IHF Women’s World Championship in Japan in 2019.

Will the same apply to this current crop?

The answer will definitely come in the next years, but do not act surprised when you see a goalkeeper wearing the number 2 shirt between the posts.

It would be Schanssema, who has donned the unusual number for a shot stopper at every point of her career.

When asked why, the answer is definitely not the expected one.

“See, when I first started handball, we all had to choose our numbers. But when that happened, I was asleep. Waking up, it was my turn. And only number 2 was available. This is how I ended up wearing it,” smiles Schanssema.

Did it become a lucky charm?

“You could say so, yes. Now it is my lucky number,” concludes the goalkeeper.