France lend a hand to help handball grow in the USA

Improving the sport and enhancing the image of handball in the United States of America has been one of the priorities of the International Handball Federation (IHF) over the past decade, as mechanisms were put in place to help boost the popularity of the sport throughout the country.

In the men’s sector, the results were promising as the senior national team qualified for the 2021 IHF Men’s World Championship but eventually missed the event due to a COVID-19 outbreak in the team. After 22 years, the USA are now ready to stage their Men’s World Championship comeback as they also qualified for the next edition, Poland/Sweden 2023, as winners of the continental championship.

The women’s sector has also gotten precious help over the past few years. The junior team earned a place at the 2022 IHF Women’s Junior World Championship, where they finished in 31st place, courtesy of their 28:26 win against Mexico in the last match of the competition.

The development cannot be achieved overnight but can be accelerated with the proper decisions. One of those decisions was to appoint Hungarian coach Edina Borsos as head coach for the events leading up to and, if qualified, through the 2024 Olympic Games in Paris, France. It was a big coup for women’s handball in the United States, as Borsos had a superb background in the sport, serving as the General Manager of the France women’s teams for 15 years, on top of her coaching experience in several clubs in Hungary.

The connection between Borsos and the French Handball Federation (FFH) was crucial in signing a cooperation agreement – as part of the IHF New Markets’ Project – between the IHF, the European Handball Federation (EHF) and USA Team Handball (USATH) to focus on the development and growth of the USA women’s national team and the global development of women’s handball in the United States.

The first steps were made in May 2022, when the USA senior and junior women’s national teams held a two-week training camp in Maison du Handball, in Créteil, France, with plenty of activities on and off the court. 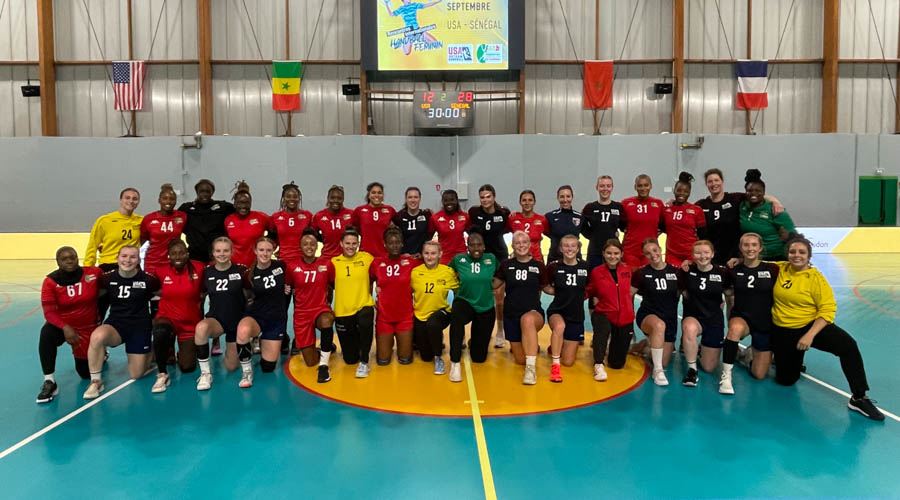 On the court, Borsos was joined by France’s national team coach, Olivier Krumbholz, who won the gold medal at the IHF Women’s World Championship, EHF EURO and at the Olympic Games with “Les Bleues”. Off the court, Allison Pineau, the 2009 IHF Female World Player of the Year and 2020 Olympic gold medallist, delivered a motivational talk to the players. The American guests were also treated to an inspirational message and training session coached by Guillaume Joli, winner of the 2012 Olympic Games, the 2009, 2011, and 2015 IHF World Championships, and the EHF EURO in 2010 and 2014.

“This is why the help of the International Handball Federation, the Federations from Hungary and France and other countries which have chimed in is invaluable. Because building a team from the ground up is very difficult,” said Borsos during the 2022 IHF Women’s Junior World Championship in Slovenia.

This training camp was also part of a package which enabled USATH to establish regular communication and exchange of information between the staff of the national teams, to access coaching assistance for training camps and competitions from FFH – but also help to set up a high-level handball (indoor and beach) centre targeting the development of high-level women’s handball in the United States.

With the support of FFH, USATH will popularise the game by making its various disciplines available to the public, mainly focusing on secondary schools and colleges. This will partly be achieved through the IHF Handball at School programme.

“The challenge is huge because we basically had a white canvas in front of us, and we just need to add the proper pieces for everything to work out. Handball is developing in the United States, and we are just trying to help the sport grow,” added Borsos.

FFH was not the only European Federation to chime in, as Borsos’ connections to Hungary also paid dividends this spring. Following the first training camp at Maison du Handball for the US Senior Team, NEKA – the National Academy of Handball in Balatonboglár, Hungary – hosted the US Junior national team’s 10-day training camp in preparation for the Women’s Junior World Championship. NEKA provided training and boarding facilities, staff, medical, and logistical support, which helped develop the cohesion needed to compete successfully as a team.

USA will have a spot at the table in the men’s and women’s tournaments at the Olympic Games Los Angeles 2028, which will mark the first time the North American sides will feature in the competition since hosting the Olympic Games Atlanta 1996.