104 games have been played at the 25th IHF Women’s World Championship, with only four more still to go. However, these will be the most important four games in the competition, which will also decide the final rankings, the new world champion and the other two medallists.

While none of the four quarter-finals went to extra-time or had dramatic moments, all of them have been enjoyable, with the four best teams in the competition lining up for the semi-finals. As Denmark, France, Norway and hosts Spain are still alive, we will be analysing their path to the business end in the competition and see how they measure up against each other, with only four days left until the end of the competition.

How’s that for writing history?

Spain 2021 might be the 25th edition of the IHF Women’s World Championship, but it is the first time since the semi-finals were introduced at Austria/Hungary 1995 that the top four teams in the competition arrived at this stage unbeaten. Denmark, France and Spain have all won their seven games up until this point, as the latter two have recorded their best-ever starts in history at the IHF Women’s World Championship. On the other hand, Norway have also been nothing short of superb, winning six games and drawing the other one, 30:30 against Sweden, in the main round.

Two years ago, three of the four teams that secured a semi-final berth – Spain, Norway and the Netherlands – had already lost a game, with the eventual world champions, the Netherlands, conceding two losses on their way to their first-ever gold medal. At Germany 2017, all four semi-finalists, France, Norway, the Netherlands and Sweden, lost one game each. In 2015, when the tournament was held in Denmark, Romania had previously lost three games, in the preliminary round, but still bounced back and secured the bronze medal. The closest instance to the current situation took place at China 2009, when Norway, Russia and Spain did not lose a game until the penultimate act of the IHF Women’s World Championship, while the other semi-finalist, France, had conceded two losses.

Will there be a first-time champion?

After the Netherlands won their first-ever world title at Japan 2019, the feature might repeat itself at Spain 2021, but only if the hosts somehow manage to steal the show and finish the competition with nine wins in nine games. From the four-team pool which is still alive, ‘Las Guerreras’ are the only side who have not won the IHF Women’s World Championship, coming the closest two years ago, when they lost the final against the Netherlands 29:30 after Lois Abbingh converted a penalty in the last second of the match.

No challenge for the main round group winners?

Well, it definitely seemed like it, as none of this year’s quarter-finals were lopsided, with three ending in five-goal wins, while the fourth, Norway’s win against RHF, being a six-goal one. Boasting unparalleled consistency, the teams that secured semi-final berths were flawless from day one at Spain 2021, winning their preliminary round groups, their main round groups and also their quarter-final matches, without skipping a beat.

It was a remarkable display for all the quarter-final winners, with Denmark trailing for only one minute and three seconds against Brazil at the start of the game and Norway never going behind against RHF. As France had to come from two goals behind in the first half against Sweden, the hardest challenge in the first knock-out match at Spain 2021 was for the hosts, who could only muster three goals against Germany in the first 16 minutes of the game, trailing by four goals, 3:7. But they finished the half with an amazing 11:3 run, to enter half-time with a comfortable 14:10 lead, which proved unassailable in the end, no matter the all-in risks taken by Germany’s coach Henk Groener.

How do they measure up in the semi-finals?

No other team have finished in the top four at the IHF Women’s World Championship more often than Norway, as the Scandinavian side secured their 13th semi-final place in 21 editions. This is also the 10th semi-final berth for Norway in 13 editions since this type of knock-out format was introduced at the IHF Women’s World Championship, with only Denmark being that present in the penultimate act of the competition, with seven semi-final berths since 1995. However, this will be the first semi-final for Denmark since they hosted the tournament in 2015, but failed to win a medal after conceding a 15:16 loss against Romania in the bronze-medal match.

France have been thoroughly efficient since 1999, securing six semi-final berths, but have won all of those to proceed to the final to boast a remarkable 100% winning percentage when they have gotten here. Spain secured only their fourth semi-final berth since 2009 and their second consecutive one, but their winning percentage in the penultimate act of the world handball flagship competition is just 33.3%, having won only one out of three, at Japan 2019.

Hagman, a championship for the ages?

Two years ago, Lois Abbingh needed nine games to score 71 goals and win the top scorer award at Japan 2019. This time around, at Spain 2021, her total has been matched by Sweden’s right wing Nathalie Hagman, but in the space of only seven games, or a superb average of 10.1 goals per game. Only a miracle would see Hagman dethroned, as she holds a 36-goal advantage over the next player still in the competition, Spain’s back Alexandrina Barbosa, with Norway’s Camilla Herrem and Nora Mork further behind, with only 31 and 30 goals scored in their first seven games. 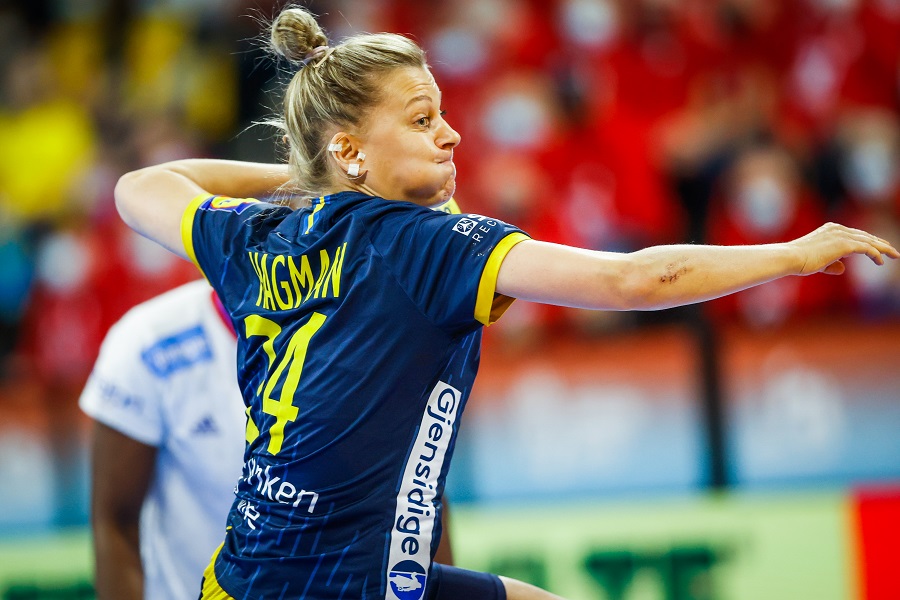 Radulovics earned her performance in 10 games, while Austria’s Ausra Fridrikas recorded 87 goals in nine games at Italy 2001, or an average of 9.66 goals per game. With two 19-goal matches against Puerto Rico and Kazakhstan, Hagman has set the benchmark for efficiency in the competition, but she was also crucial in the main round clash against Norway and in the quarter-final against France, when she scored nine goals each time.