Final decisions are made: Who will fight for bronze?

Live blog: Well, these three days have been intense at the first-ever IHF Four-a-Side Wheelchair Handball World Championship, as the round phase is closing after 15 competitive matches, which produced great results but also brought huge surprises on the court of the Dr Hassan Moustafa Sports Hall.

With the last game concluding, we also have the final standings in the round phase, as Brazil took first place, with 10 points, followed by Egypt, with eight points. Egypt’s only loss was against Brazil, 0:2, but the hosts duly delivered some superb games, as they will now fight for the final. Interestingly enough, Egypt have not lost a set in the other games. Therefore the game will surely be one to watch.

*Chile and India secured better finishes due to owing the tiebreaker, the direct encounter between the two sides.

Well, if there was a question about the winner of the game, Egypt duly delivered in only two minutes, taking a strong 4:0 lead in the second set. With Magdy Talaat Abdo Abbas cementing his status as the competition's top scorer, his tally is now over 30 points. His spin shot, the second of the game, put him at seven points, and Netherlands have simply not found the proper way to answer this strong start of the half from Egypt. And when it rains, it pours… The European side totally collapsed and failed to score a point until 6 minutes and 53 seconds in the set, with their bronze medal game hopes up in the smoke. Eventually, the second set was clinched by Egypt, 7:3, who took their fourth win in five games.

Egypt proved that they can bounce back in style after a defeat. Losing the game against Brazil was a blow, but they are still in the final, trying to avenge that defeat tomorrow, at 19:00 EET. Unfortunately for the Netherlands, this was the fourth loss in a row, with their morale down and without a chance to mount a comeback. They will feature in the Placement Match 5/6 tomorrow, the first match of the last day of the competition, where they meet India.

For half of the first five minutes, it looked like Netherlands were on the correct path to secure the set and clinch their berth for the bronze medal game. But then, their attack collapsed, failing to convert simple one-on-one shots, as the progression was good, only for the missed shots to pile up. Mohamed Anwar Ahmed Hassanein was nothing short of superb between the goalposts, with four saves. At the same time, Mohamed Anwar Ahmed Hassanein’s converted spin shot was the turning moment of the match, when Egypt went ahead, 4:3, with only three minutes to go. Netherlands cut the gap to only one goal, 6:5, with 38 seconds to go, but Mady Abbas scored in the open goal to help his side win the set, 7:5.

Netherlands will definitely have to improve their attack, which has a meagre 35% efficiency, but they also do not have the depth to really apply pressure on Egypt. Remember, the Dutch side only needs a set to go through, otherwise, Slovenia make the cut for the bronze medal game, where they will face Chile.

18:50 EET What’s at stake in the final match of the round phase?

The round phase of the first IHF Four-a-Side Wheelchair Handball Championship will be over in just an hour after hosts Egypt take on the Netherlands in a much-expected clash. Egypt are already through to the final of the competition, having secured six points and build an unassailable lead since the second day of the competition. Still, the game is even more important for the Dutch side, who will be playing for a chance to seal a medal at the end of Egypt 2022.

In that case, Slovenia will be out of contention for the bronze medal, losing the tiebreaker on sets against the other sides (NED +1, CHI 0, SLO -1).

This means that India are now officially going to the Placement Match 5/6, and Chile are qualified for the bronze-medal match. Slovenia will know their fate only later, as the Netherlands face Egypt, with the European team needing a win against Egypt to fight for a medal against Chile. 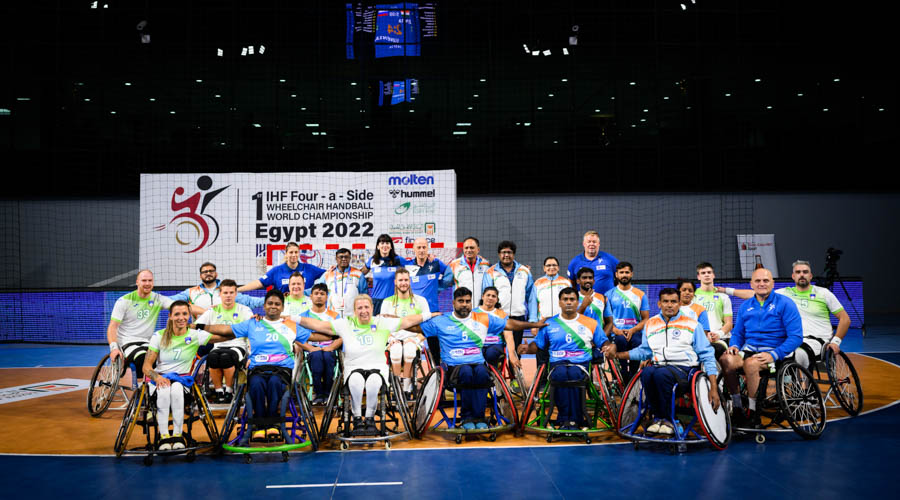 We are going into the decider! Exciting moments in the Dr Hassan Moustafa Arena as Slovenia followed the same path from the first set. Taking a timeout after being 0:2 down in the second set worked wonders, as they scored six unanswered points and took the set with a 7:3 win, as Matej Arh was simply unstoppable. India had little answer, as no other player than Choudhari and Shanmugam scored a single point in this match.

We will go into the decider now. Let’s see who will still be in contention for a place in the bronze medal game.

Slovenia was the first team to score a point, but Javed Ramjan Choudhari, India’s top scorer in the competition, sent his team on the right path with a spin shot from 10 metres that put them in the lead. The European side had once again too many turnovers, with Ramesh Shanmugam also putting points on the scoreboard for the Asian side, as India took control of the game and never looked back.

As the gap grew to 5:2 for India, Slovenia were forced to take a timeout, which duly delivered their comeback. Two goals from David Skorjanc and Matej Arh helped the side tie the game, 6:6, with Skorjanc also saving a last-gasp shot for India. The golden goal was, however, scored by India. Ramesh Shanmugam scored with a powerful shot that Skorjanc could not save.

Chile started the second set strongly, scoring two unanswered points, but those were the only points they could muster in the second set, with a strong comeback from Brazil that duly took advantage of Chile’s appetite for risk. For every time their South American counterparts had an open goal, Brazil punished them with either goalkeeper Marcelo Amaral scoring a goal or a spin shot converted by Anderson Ferreira, with four of those shots managed in the second half by Brazil.

The team that won all the games so far in the competition finished the set with a 12:0 unanswered run. The difference was made by the goalkeepers, Brazil’s Marcelo Amaral boasting 17 saves, while Chile’s goalkeepers combined for only two saves throughout the match.

At the end of the round phase, Brazil secured first place – with five wins in five games and never dropping a single set. They dominated their opponents clearly, as they were the best attack and defence after four rounds, which will probably be the case after this day. 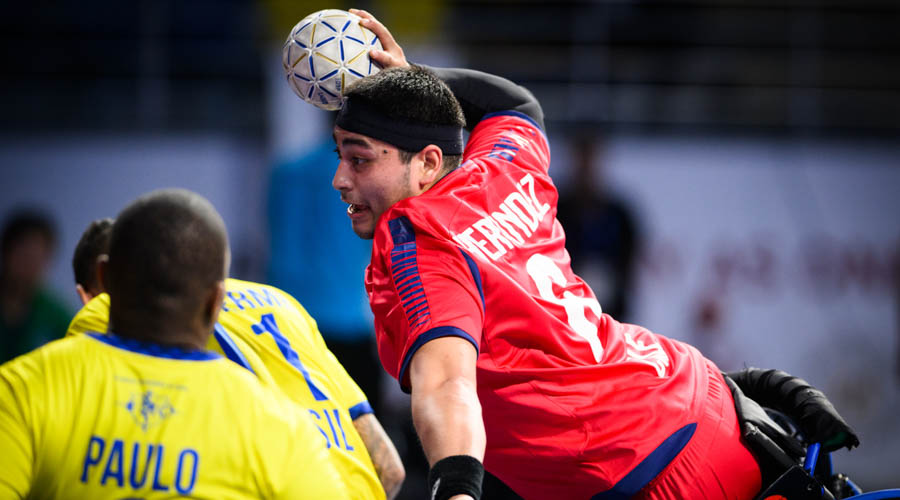 There has been no question about the winner of the first set, as Brazil have been thoroughly dominated from start to finish, taking a 6:0 lead after only 3 minutes and 30 seconds. Thanks to a spin shot from Guilherme Lourenço and an open goal shot from his area by Marcelo Amaral, both counted double the points. Chile missed their usual never-say-die attitude and were outplayed entirely, with Amaral adding to his outstanding save tally in the competition. Amaral was immense, stopping 11 shots as he improved his overall tally to 43 while also scoring four points, with Lourenço and Jordean Rodrigues adding the other eight, to lift Brazil to a 12:1 lead.

Chile did score a point on the board. Still, Brazil are marching to their fifth win in the round phase, dominating virtually all the teams in the competition and becoming the go-to team for winning the gold medal tomorrow, when they face Egypt in the final.

If you want to find out more about the game just before it starts, take a look at the competition mini-site. Here you will find background stories, statistics, photos, news and much more.

Do you want to review what happened yesterday and look ahead to what's coming up today? Then take a look at the preview.

Do you want to follow the action live? You can do that on the IHF Youtube channel.

Egypt’s Magdy Talaat Abdo Abbas is still the top scorer of the competition, with 23 points, followed by Brazil’s Jordean Rodrigues, who has 19 points, scoring three spin shots throughout the whole competition. They are joined on the podium by Chile’s Angel Hernandez, who has 17 points, in a crunch battle for the top scorer title, proving to be quite interesting. Interestingly, the first woman in the standings is Luz Carrasco, as Chile’s player scored seven times, enough to sit in tenth place.

In the goalkeepers’ standings, Brazil’s Marcelo Amaral has produced the highest number of saves, 32, with an outstanding efficiency of 78%. He is closely followed by Netherlands’ Joyce van Haaster, with 28 saves and Slovenia’s David Skorjanc, who saved 22 shots.

Netherlands face Egypt in what are pivotal games for the podium of the competition. If the Netherlands side lose, they will be out of contention, making it through only if they take a set and if India beat Slovenia.

We had two days of action-packed wheelchair handball activity at the first IHF Four-a-Side IHF Wheelchair Handball World Championship, as we have already found out who the two finalists are. Brazil and Egypt are the two sides that will contend for a medal after displaying the best wheelchair handball so far.