Wheelchair handball has been getting more and more popular throughout the world over the past two decades and the strides made by both the International Handball Federation (IHF) and the National Federations have gradually improved the level of the game and the interest around it.

However, the costs of wheelchair handball are still unaffordable in some cases and, therefore, the next step was to create and develop a new discipline in wheelchair handball, namely four-a-side wheelchair handball. This made it possible to host bigger competitions as it encouraged participation, since, for example, fewer players with access to the equipment are needed, which removes some barriers regarding financing, and new possibilities for women have been created to practice together.

Eventually, the foundation was laid for the first-ever IHF Four-a-Side Wheelchair Handball World Championship, due to be played in Egypt between 22 and 25 September, with six sides taking part from four different continents – hosts Egypt, Brazil, Chile, India, the Netherlands and Slovenia.

How many players are on the court?

Wheelchair handball four-a-side is practised by two teams of four players. The aim of each team is to score goals and prevent the other team from scoring. With less players on the court, the game, which is influenced by both indoor handball and beach handball, is more attractive, has a faster pace and delivers an excellent experience to both players and fans.

Any player present on the court may act as a goalkeeper at any time, but only one player may enter and remain in his own goalkeeper area at the same time. Therefore, the goalkeeper does not wear a special goalkeeper shirt but the same shirt as the rest of the team.

As the 1st IHF Four-a-Side Wheelchair Handball Championship is a mixed competition, at least one female player per team must be on the court at any time, while at least two players out of the final roster of maximum 10 must be female. 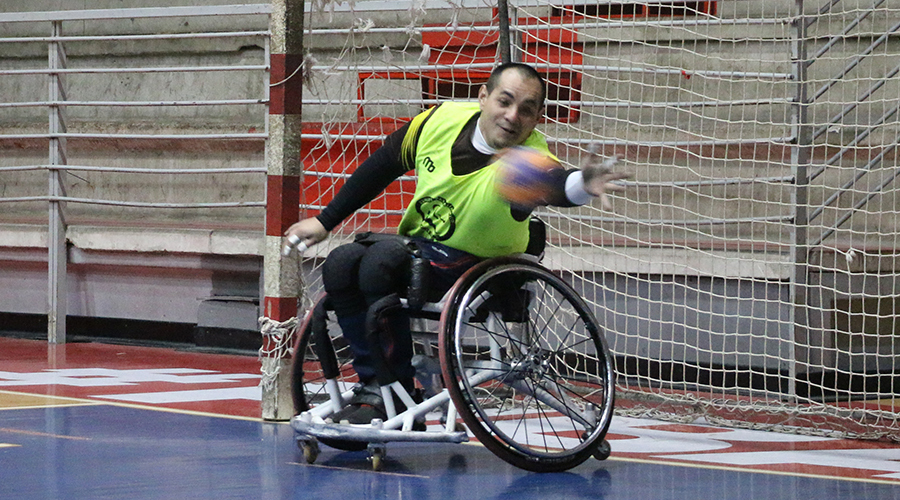 How is the game structured?

Matches consist of two sets of 10 minutes, which are scored separately. The half-time break is five minutes long. If the score is tied at the end of a set, the winner shall be decided by golden goal.

If both sets are won by the same team, this team shall be the overall winner, with a score of 2-0. If each team wins one set, the teams will play a third set (tiebreaker) of five minutes. If at the end of the third set the match remains tied, the winner will be determined by a shoot-out. If a match is decided by tiebreaker, the overall result shall be 2-1 for the team that has won the tiebreaker.
Each team has the right to receive a one-minute team time-out in each set of the regular playing time. The teams must not be granted time-outs in the third set (tiebreaker). The team requesting a team time-out must be in the possession of the ball.

Are there any changes to the court?

A goal is scored when the entire ball has crossed the entire width of the goal line, provided that no violation of the rules has been committed by the shooter or a teammate before or during the shot. However, there are special circumstances for Four-a-Side Wheelchair Handball.

If a goal is scored by a 7-metre throw, two points are awarded as well.

Are there any suspensions or disqualifications?

Yes, both. It is not permitted to

Fouls, where the action is mainly or exclusively aimed at the body of the opponent, must lead to a personal punishment. This means that, in addition to a free throw or 7-metre throw, at least the foul is to be punished progressively, beginning with suspensions and then disqualification.

A player who is attacking an opponent in a way that is dangerous to his health is to be disqualified.

Resin is not allowed in wheelchair handball and, therefore, the balls used for official IHF tournaments shall be in compliance with the provisions of the IHF Ball Regulations, specifically regarding handballs played without resin.

For the complete IHF Rules of the Game – Wheelchair Handball Four-a-Side, click here.

Photos courtesy of the Handball Federations of the Netherlands, Chile and Slovenia