With the draw ceremony conducted in front of the globally recognisable Pyramids of Giza and the Great Sphinx and the choice of an ancient Egyptian deity as the mascot, the hosts of the 27th IHF Men’s World Championship are truly making the event one of a kind and representative of their rich history.

The mascot, Horus, was presented at the draw ceremony held at the start of September, and now we look at the details of why this deity was chosen and the historical meaning that ties him to the World Championship.

Competitors remind you to be better, faster, stronger

Horus is one of the most important ancient Egyptian deities. As a god of the sky, Horus represents qualities such as power and strength. In Egyptian history you will find numerous mentions of Horus in different forms and in different periods. Horus is most often represented as a falcon or a man with the head of a falcon, the latter of which is the case with the mascot for Egypt 2021.

The qualities Horus possesses were the core reason for this choice as mascot. According to the Egypt 2021 organising committee, those qualities are “extraordinary strength, agility, power and stamina: Horus is the definition of superhuman. [He is] a legendary hero, reminding us of the historical magnificence of Egypt’s most influential mythological Gods.”

Horus was also chosen to encourage and motivate the host nation’s own team, to be an icon representing the powerful history and ancestry in Egypt, and to serve as a beacon of athleticism, strength and honour. “Competitors are not enemies. They are people who remind you to be better, faster, stronger” is the organising committee’s interpretation of Horus’ function as an athletic inspiration.

Meaning in every design detail

The creation of Horus the mascot required a number of steps, beginning with the conceptual design discussion and preliminary artwork, followed by revisions, production and costume creation. While Horus has changed between representation as a falcon and a man with a falcon head, the choice for Egypt 2021 was obvious: a falcon-headed man with colours inspired by the official tournament logo. The design reflects the body shape of both a god and a handball player.

In addition to the body design of the mascot, there are various meaningful elements that comprise the costume.

The pschent, known as the double crown of Egypt, combining the crowns of Upper and Lower Egypt, sits atop Horus’ head. For the Egypt 2021 mascot, the crown of Upper Egypt has been replaced with a golden handball, which rests inside the pschent deshret crown of Lower Egypt. Horus the mascot can remove this ball for photos with fans or to play with. 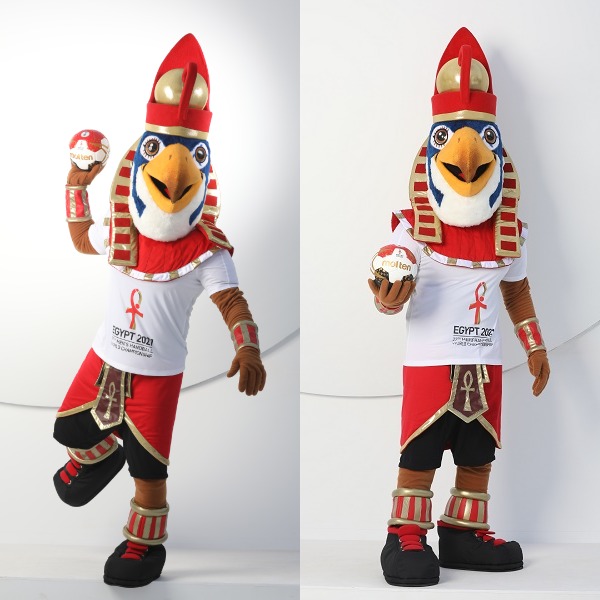 The face mask was designed to be friendly yet powerful. The eyes are each enclosed: one with a sun and one with a moon. The back of the mask features gold fabric with red stripes that drops over the shoulders, designed to mimic typical pharaohs’ attire. Visible behind these fabric pieces, golden ‘dragon scale’ features drop from the helmet to the end of the shoulder.

At the neck is a usekh or wesekh, a broad ornamental collar often depicted in images of ancient Egyptian elite. The Egypt 2021 mascot’s usekh is made of red metal and golden beads, representing the Egypt national team jersey. Below that is the custom golden chest piece, featuring the Egypt 2021 logo on the plate and straps around the shoulders to hold it in place.

Another common ornament seen adorning ancient Egyptian gods are the gold bracelets worn on arms, wrists and ankles. The Egypt 2021 mascot has these golden bracelets, which are accented with the red colour used in the team jerseys.

An ankh – a symbol of life – is featured on Horus the mascot’s black belt trimmed with gold, which forms part of the shendyt – an ancient Egyptian kilt-like garment. Horus’ shendyt has two layers: the outer made from red fabric with black stripes, with the edges embroidered in gold, and the inner in a thick white cloth.

For further information on Egypt 2021 visit the IHF mini-site or the official tournament website.