The four teams qualified for the second edition of the EHF Finals Women, the business end of the second-tier competition of the European club pyramid, the EHF European League Women, are known after an intense weekend that concluded the quarter-final phase.

Two teams have returned from the inaugural edition, Herning-Ikast Håndbold and CS Minaur Baia Mare, as another two contenders, Viborg HK and SG BBM Bietigheim, will join them to vie for the trophy on 14 and 15 May.

The biggest surprise of the quarter-finals was definitely CS Minaur Baia Mare’s win against Norwegian outfit Sola HK. Baia Mare, who were the team with the lowest amount of points coming into the knockout phase of the EHF European League Women, eliminated Sola with a 69:61 aggregate win.

The Romanian side had only qualified due to the reigning champions Les Neptunes de Nantes’ loss in the last game of the group phase against MKS Zaglebie Lubin. Despite boasting only a five-point tally, Baia Mare secured a crucial 40:32 home win in the first leg and managed to mount an astonishing comeback in the second half of the second leg to snatch a draw, 29:29, despite Sola leading 16:10 at the break.

Sola failed to progress to the EHF Finals Women despite losing only one game throughout the season and will rue the missed chances in the second leg, when Baia Mare started with a strong 7:1 run in the second half to seal their qualification.

A strong favourite to clinch the trophy before the group phase, SG BBM Bietigheim extended their winning streak to eight games this season, by taking a 59:43 aggregate win against ESBF Besancon. The German powerhouse clinched a 29:23 win in the first leg and doubled down with a 30:20 victory in the second game, with all their outfield players scoring at least one goal.

After finishing fourth in the inaugural season of the EHF European League Women, Herning-Ikast Håndbold are returning to the EHF Finals Women, with their own eight-game winning streak, extended by two wins against SCM Ramnicu Valcea, who they eliminated with a 72:61 aggregate win.

The Danish side boast the best attack in the competition, scoring 265 goals in eight games, or an average of 33.1 goals per game, and are the team with the largest number of wins in the history of the rebranded second-tier competition of the European club pyramid, with 16 wins out of 19 games.

Last, but not least, Viborg HK are back into the top four teams in a European competition for the first time in four years, after reaching the semi-finals of the Women’s EHF Cup in the 2018/19 season.

However, the Danish side struggled against Storhamar Håndball Elite, despite taking a 33:31 away win in the first leg. Powered by 12 goals from right wing Emilie Hovden, Storhamar led by as many as three goals against Viborg in the away leg, but eventually lost by the slightest of margins, 37:38, conceding a 68:71 aggregate loss.

Viborg also boast the top scorer of the competition, centre back Kristina Jorgensen, a bronze medallist of the 2021 IHF Women’s World Championship, who scored 61 goals over the eight games played in the competition. 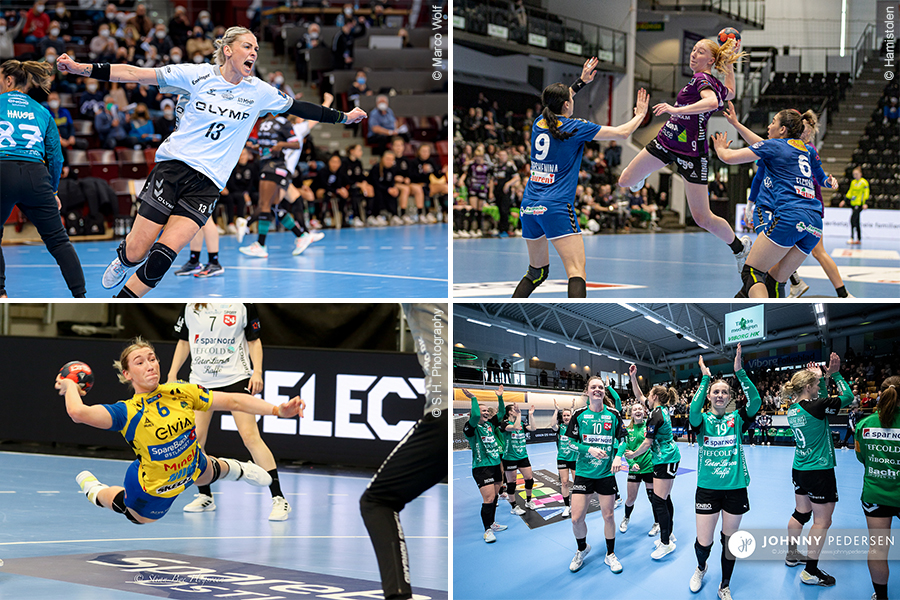 The EHF Finals Women will take place on 14 and 15 May in a location due to be announced by the European Handball Federation, with a draw deciding the two semi-final pairings.