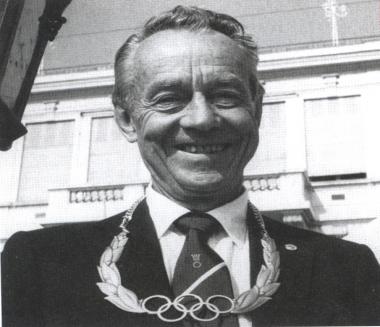 A life devoted to sport: Paul Högberg, born on 30 October 1911, was one of the gymnasts of the Swedish team participating in the Olympic Games in Berlin in 1936. Subsequently, he was the manager of the College of Physical Education in Stockholm and the Academy of Sports. At the same time, he was a member of the Swedish National Olympic Committee. In this position, he made the Swedish delegation participate as managing committee in three Winter Olympic Games. Since 1950, he had been an active member of the IHF Council where Högberg as committed Vice-President proposed himself as President. Högberg was particularly concerned to integrate non-European countries into the IHF. In 1984, he was named Honorary President by the International Handball Federation. This Swedish personality had also made a name for himself as author of several books on sports. He died on 19 February 1999 at the age of 87.