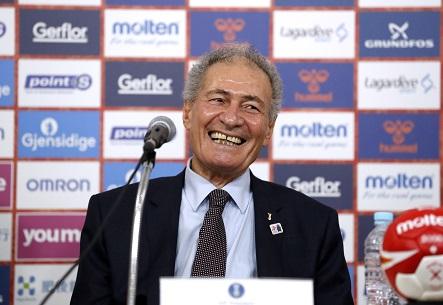 Hassan Moustafa, born on 28 July 1944 in Cairo, devoted his life to handball: handball player with the club El Ahly for 15 years, Egyptian representative player for ten years, club coach and federation coach in Egypt for ten years, international referee, election as best coach in his country in 1998. In addition to his sports career, he completed a doctoral thesis on the topic “The administration elements of a successful mission of clubs and federations” after he received his Master’s degree in Physical Education.

He also travelled to Germany to study at the German College of Physical Education and Sports in Leipzig, where he got a diploma in training. Further achievements: President of the Egyptian Handball Federation (1984-1992 and 1996-2008), Secretary General of the Egyptian National Olympic Committee, President of the IHF Commission of Coaching and Methods as well as IHF Council member from 1992 to 2000. At the IHF Congress in 2000, he was elected President of the International Handball Federation and, in 2004, he was nominated member of the Council of the Association of Summer Olympic International Federations (ASOIF).