“I was born to be a handball player.”

And, yes, it could not have worked out differently for Julie Mathiesen Scaglione, one of Denmark’s top stars at the 2022 IHF Women’s Youth (U18) World Championship.

Julie’s mother, Lone Mathiesen, was a member of the team that secured the gold medal at the 1997 IHF Women’s World Championship, seven years before Julie was born.

But the passion for the sport stayed in the family and, therefore, it was just obvious that Julie was going to try to play handball, as many girls do in Denmark.

When that passion was doubled by an innate ability to control the ball, to understand the basics of the sport and some superb physical abilities, the path was clear for Scaglione to become one of the greatest prospects of Danish handball in the past few years.

In the first match of the main round, against Croatia, Denmark were struggling to get a grip on the game, before the towering left back entered the fray in the 17th minute. With four goals until the end of the half, Scaglione helped her side take the lead and from that moment on, they never looked back.

At North Macedonia 2022, she has already scored 25 goals in four matches, an average of 6.25 goals per game, with a 68% shot efficiency, despite not being used throughout extensively during the tournament.

Indeed, Scaglione, who was branded a ‘jewel’ by the Danish media, has confirmed that her potential is huge, after being selected as the All-star left back at the W17 EHF EURO 2021 last summer, where Denmark finished in fourth place.

“It has been a very good tournament here in North Macedonia for us, as we won all the four games we played. We displayed some good handball, we are feeling very good, we are a true team and I hope to win a medal. It would be an amazing feeling,” says Scaglione.

The 17-year-old left back is one of the most experienced players in the competition, having already two seasons under her belt at Ikast Håndbold, one of the powerhouses in Denmark, both in the domestic league and in the EHF European League Women.

After making her debut in international competitions two seasons ago, scoring two goals as a 16-year-old prospect, the left back added 34 goals in the EHF European League Women in the past season, including a 13-goal outing against Romanian side CS Măgura Cisnădie.

Scaglione also added four goals in the bronze-medal game of the competition against another Romanian side, CS Minaur Baia Mare, being an integral part of the team that also finished third in the Danish league in the 2021/22 season.

“It is truly a blessing to be part of such good teams and it really helped me a lot develop my career. My role in the Denmark youth women’s national team is different, I tend to play more and have more plays designed for me, but I adapt to everything what I need to do on the court.

“Having the experience at the club level and also with the Danish senior women’s national team is huge, it helps me a lot and you can probably see that on the court here,” adds Scaglione. 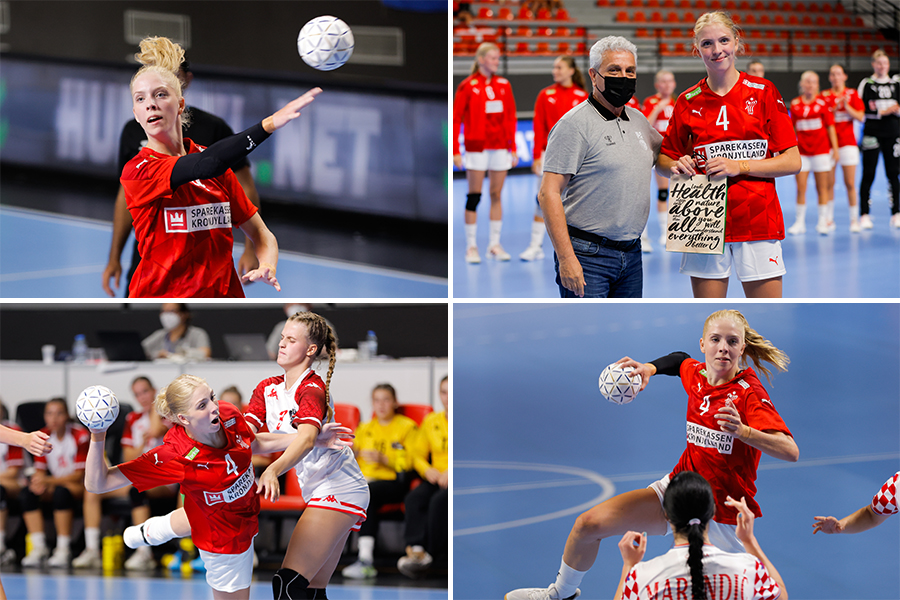 Indeed, her huge potential has been also identified by Jesper Jensen, the coach of the Denmark women’s national team, who has already called up Scaglione for the senior team.

“I was really nervous. It was a lot of excitement, but the girls really took me under their wing and I felt very proud, very privileged to be there. It was an amazing experience, which I would likely want to feel again in the future,” adds the 17-year-old left back.

But right now, her only focus is to secure a medal at the 2022 IHF Women’s Youth World Championship with the Scandinavian side, who has already clinched a quarter-final berth after wins against Austria (32:21), the Faroe Islands (31:20), Portugal (33:25) and Croatia (29:23).

A tough clash against Egypt on Friday will decide the winner of Group II of the main round, as both teams are tied at the top of the group, with four points each. While the path gets more difficult, with a likely clash against Hungary, Norway or France in the quarter-finals, Denmark are still confident that they could contend for a medal.

Especially as they have always finished in the top six places at every edition of the IHF Women’s Youth World Championship they took part in, sealing the gold medal twice – in 2006 and 2012.

And with the type of performances she put in until now, Scaglione might be a challenger for the All-star Team.

“Of course I would like that, who would not? But let’s wait for the competition to end, a medal is more important,” concludes the left back.

Dazzling at North Macedonia 2022: Minseo Kim follows in the footsteps…