For many handball players, hearing the national anthem at a World Championship is a unique feeling that can bring tears into their eyes. It does not matter how experienced one is or how many times the anthem has been played before a game; the right moment can ravage one’s soul.

For Eliana Lima, the “Hino Nacional Brasileiro” brings other feelings inside her soul: the sense of duty and love for the country she was born in and has always represented. As a former Physical Education Trainer in the Brazilian Army, Lima has always saluted during the anthem as she faces the green, yellow and blue flag.

You might have seen her in that position just before the game while her teammates keep one hand close to their hearts. But Lima still has that sense of pure respect for the flag and anthem and is literally brimming with a mix of confidence and determination just before any game.

Until this point in the competition, everything worked out just fine for Brazil, who have been the team to beat at the inaugural edition of the IHF Four-a-Side Wheelchair Handball World Championship.

The South American side have not dropped a set in the round phase, winning all the five games they played in straight sets. Including the one against Egypt on Friday evening, when they needed a golden goal in the first set but thoroughly dominated in the second one to clinch first place at the end of the round phase.

“We are very honoured to represent Brazil in this competition. We dreamt a lot about it; we have been always training hard and dreaming about the moment we were going to be here. While the COVID-19 pandemic has cancelled the previous competitions that were due to be played, this has been our objective.

“When I hear the anthem playing, I feel the sense of duty to my country and I always salute the flag. It is an amazing feeling to be here, and it is just beautiful that we can play for the gold medal,” says Lima. 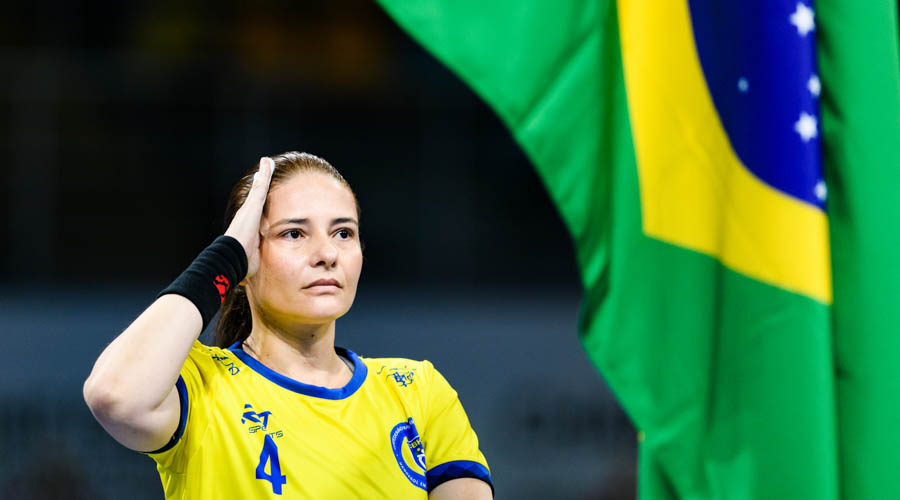 Indeed, Brazil have been nothing short of superb, with the focus on wheelchair handball for over 15 years paying the right dividends exactly at the precise moment.

The South American side are certainly the most experienced team at the inaugural edition of the IHF Four-a-Side Wheelchair Handball World Championship, with the first games in the discipline being played in 2005.

They had both the time and the means to create a good team, with plenty of chemistry and experience, that clicks instantly on the court and provides the energy needed to rack up win after win.

So far, Brazil scored the highest number of points in the competition, 74, or an average of 7.4 points per set, and conceded only 24 points, with the best difference, +50, in the championship before the final day.

They have also delivered four players who scored at least 10 points in the first five games: Jordean Rodrigues, Guilherme Lourenço, Marcelo Amaral and Anderson Ferreira, with the first two placed second and third in the top scorer standings, while Amaral and Ferreira are on the 11th and 12th place.

Amaral has also been the top shot-stopper at Egypt 2022, with 50 saves in five games, boasting an otherworldly saving efficiency of 80.2%, which has really tilted the matches in Brazil’s favour.

For her part, Lima has scored one point so far but has been crucial in keeping the rhythm in Brazil’s games when she was on the court and could definitely be a factor in the final against Egypt, where anything might happen.

“This game, wheelchair handball, has changed my life. So it is just normal I will give everything on the court. And I am sure my teammates feel the same because they are in the same situation. This is why it is an honour, and we are so motivated to win,” adds Lima.

Whether the dream might end with a gold medal around the neck, the next game against Egypt will bring the verdict.

Brazil have shown signs of weakness at times, especially in the first set of the matches, where they needed the golden goal to win against India and in the first match against Egypt, in the round phase.

But, all in all, with the right amount of experience and attention to detail, Brazil are the team favoured to secure the gold and win their sixth game in a row.

This will surely attract more attention and popularity for the side that has battled through thick and thin over the last decade.

For Lima, though, this World Championship has been a dream in the making.

“I played handball as a little kid in Fortaleza, my local city. Therefore, playing for my country in a tournament as big as this is huge,” concludes Brazil’s player.