Goalkeeping as an art: Van Haaster impresses at Egypt 2022

Two decades ago, Joyce van Haaster was considered one of the brightest talents in Dutch handball. But a serious health scare derailed the plan to become a top goalkeeper and, probably, a stalwart in the Netherlands’ women's national team.

“But when I saw that wheelchair handball was starting to become a thing in my country, this was the moment I knew I had to start playing and rekindle my love with the sport because I was always the proactive person,” says van Haaster.

Only eight years after she started playing wheelchair handball, van Haaster is now an integral part of the Netherlands Four-a-Side team competing in the first-ever IHF Wheelchair Handball World Championship in Egypt.

Her penchant for saving shots, which has been observed by many over two decades ago, is crucial for the Netherlands side, as the Four-a-Side wheelchair handball rules enforce at least one woman is permanently on the court throughout the game.

Sure, the discipline is more fluid than indoor handball, with van Haaster also being used in attack, where she usually sets up her teammates for a shot. However, no team from the six currently donning the court at the first-ever IHF Four-a-Side Wheelchair Handball World Championship has planned the defensive phase better than the Netherlands. 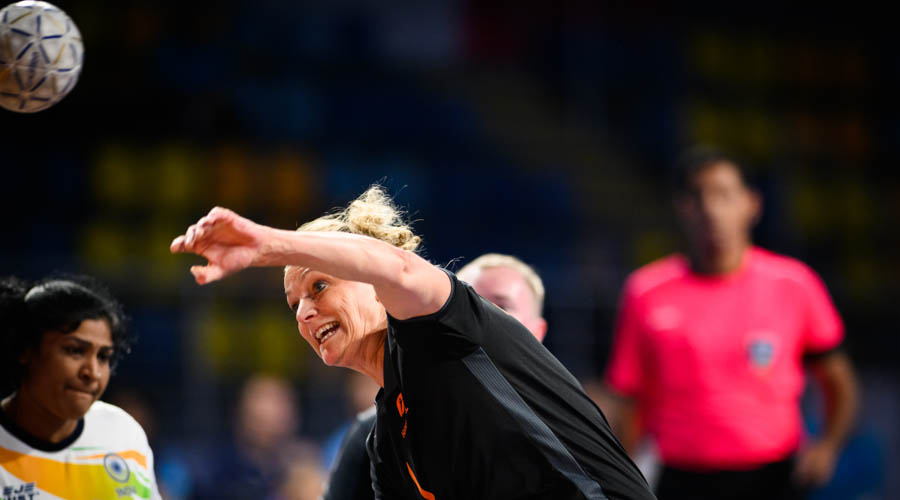 “It is very different from the movements that were in indoor handball, but the feeling is the same. To save a shot is superb, knowing that you are helping your team, especially in tough moments.

“When I first got into wheelchair handball, I was playing wheelchair tennis, but it was the feeling that attracted me; it was like this magnetic connection because I loved to play handball before, and I just felt at home, between the goalposts, doing what I love. Therefore, I never gave up wheelchair handball after playing the first time,” adds the Dutch goalkeeper.

Van Haaster has become one of the most important players on the Netherlands side in wheelchair handball, irrespective of whether it is the Six-a-Side team or the Four-a-Side team, that is currently competing in the World Championship.

With wheelchair handball now restarting in the Netherlands, after the COVID-19 pandemic threw a shade on the sport and basically stopped it in its tracks, van Haaster and her teammates can practice freely and are slowly returning to the previous level.

Netherlands are one of the best teams in Europe, boasting over 100 players in almost a dozen clubs throughout the country, with wheelchair handball getting increasingly popular.

But there is a certain lack of experience in the Four-a-Side version of the discipline, as the Netherlands side have been mostly training in the Six-a-Side version. The adaptation period was to be felt on the court in the Dr Hassan Moustafa Sports Hall during the 1st IHF Four-a-Side Wheelchair Handball World Championship, as the Netherlands certainly had some growing pains during the matches.

Their start was flawless, a 2:0 win against Chile, but their chances for the gold medal were swiftly erased after conceding three losses in a row – 0:2 against Brazil, 1:2 against Slovenia and 0:2 against India.

The latter loss was undoubtedly the most surprising, especially coming against an inexperienced team that is still finding the proper chemistry.

But van Haaster is upbeat about Netherlands’ chances in the future. “For me, it is surely going to be a bigger sport in the next years, both throughout the world and in the Netherlands. Personally, I like it a lot and it would be hard not to play.

“I am just happy that we have our first World Championship after the plans to organise the competition were scratched in the last years due to the COVID-19 pandemic,” says the Dutch goalkeeper. 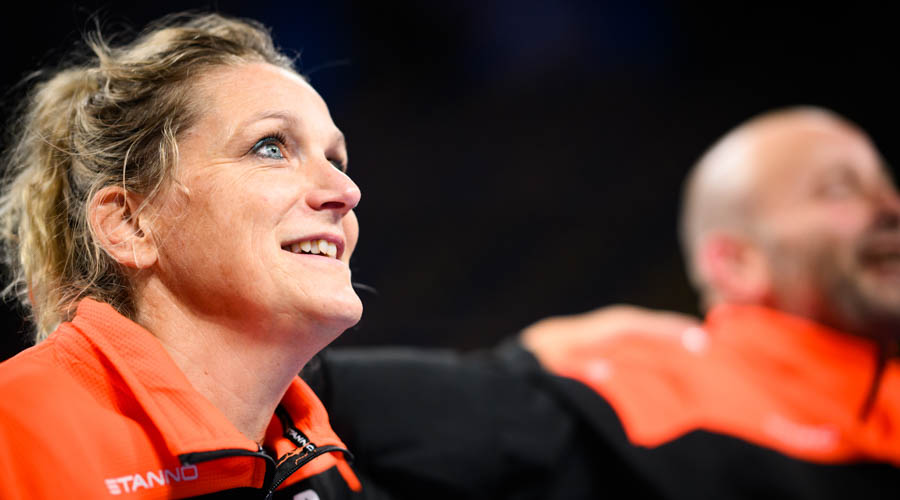 Despite the four consecutive losses, the Netherlands still have a chance to progress to the bronze-medal game, provided they win against Egypt in the last match of the round phase on Saturday.

They will surely need a good game from van Haaster, who has established herself as one of the top goalkeepers in the competition.

In fact, no woman has made more saves than the Dutch goalkeeper, with her 28-save tally ranking her second throughout the tournament, only behind Brazil’s Marcelo Amaral, who has racked up 32 saves.

With a saving efficiency of 47.9%, van Haaster ranks seventh overall in the top goalkeeping efficiency and fifth among the goalkeepers who made at least ten saves at the 1st IHF Four-a-Side Wheelchair Handball World Championship.

Van Haaster only follows in the line of some superb performances of Dutch goalkeepers in all disciplines.

But she will have to wait a bit to become a world champion, like her favourite goalkeeper in indoor handball, Tess Wester, who secured the gold medal in 2019.