In 1993, the Egypt men’s national junior team wrote history by securing the gold medal at the IHF Men’s Junior World Championship with a 22:19 win against Denmark on their home court, in the capital Cairo, and with over 30,000 fans attending the matches.

Coming full circle, the first edition of the IHF Four-a-Side Wheelchair Handball World Championship is taking place in Egypt, in the Dr Hassan Moustafa Sports Hall in 6th of October, and there are chances for the hosts to win once again the gold medal.

The common denominator? Sure, the home court and the die-hard fans that flock to see their national teams, irrespective of age or gender, supporting them through thick and thin.

But there is also Wael Abdelaaty Sayed Aly. He was a member of the junior team that became world champions in 1993. He was also part of the side that secured the gold medal at the 2004 IHF Men’s Beach Handball World Championship. And he also accepted to become the coach of the Egypt national wheelchair handball team, despite the side being founded just ahead of the start of the competition.

“I was asked if I wanted to coach this team and I said yes, why not? It is always an honour to represent Egypt in international competitions and it is always nice to compete at the highest level,” says Sayed.

Yet, for a man who has seen plenty both in indoor and beach handball, wheelchair handball could well be the toughest challenge yet. First of all, he had little to no experience to it, as Egypt are just developing the discipline in their own country.

Then, the rules are different, the pool of players is not big and the lack of competitive matches or a domestic league will always impact the baby steps made by the side. Last, but not least, there is the added pressure, as Egypt always want to win.

“Well, the mentality in Egypt is to win. And to win, it means to win now, not tomorrow, not in a year. There is always this extra layer of pressure, which can either help a team develop fast or can really put a dent in our challenge. Fortunately, we managed to work well and build a very nice team together.

“And all the credit goes to the players in the squad. They have worked very, very hard, in the past months we had literally no break, only training, in many cases two times per day, we only had Tuesdays and Fridays off, therefore it was a huge effort for all the players,” adds Egypt’s coach. 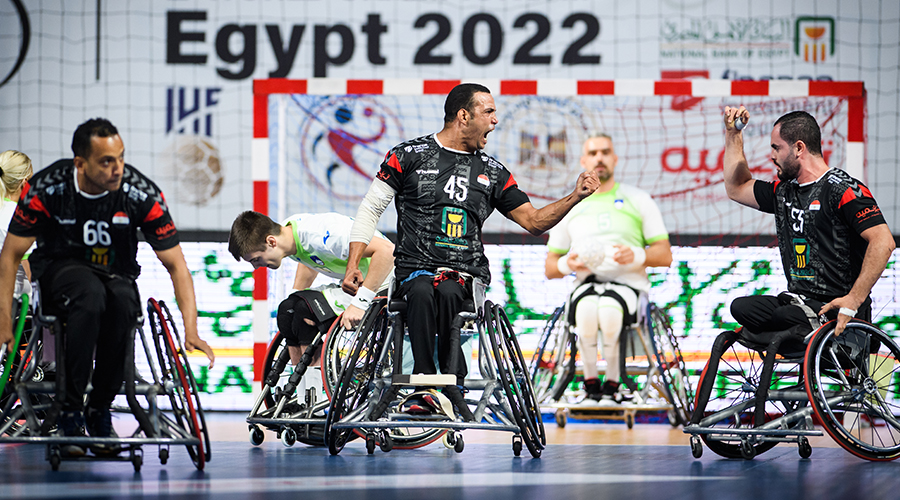 His experience also worked wonders, as well as his penchant for reinventing himself and trying to find a new niche every time he sets an objective.

Here was Sayed, working with players like Yehia Elderaa or Ali Zein, only to try and put another brick into Egypt’s handball quest a few years later, that has been working so well in the past few years.

“Wheelchair handball is different than indoor handball, but has certain elements borrowed from beach handball, with spin shots that count double the amount of points for a goal, it is played in sets, and so on.

“It is totally different and we need to pay attention to the rules and adapt to them, which is a tough ask for everybody,” says Egypt’s coach.

However, the first official games of the team that has been founded only months ago, just before the start of the first Four-a-Side IHF Wheelchair Handball World Championship, were a resounding success.

Difficult games await Egypt, like the one against Brazil on day two – another team with a 100% record, ready to take on the African side.

Yet, Egypt have a special ingredient to their team – a proper motivation.

“We are always playing our hearts out, irrespective of the competition or the opponent. This is true for every national team of Egypt and the players have truly outdone themselves and I expect them to do the same in the next game, no matter the result,” concludes Sayed.

A new gold medal would add to Egypt’s treasure from the past few years. However, one thing is certain: the African nation loves handball and lives and breathes the sport. It would also cap off a perfect summer, where Egypt’s men teams have become African champions in every category – senior, junior and youth.