Remaining quarter-finalists to be determined

Live blog: The last main round day in Heraklion is over and all eight men's quarter-finalists are known.

18:52 EEST Men's games finished for today, join us tomorrow for the 9-16 placement round, quarter-finals and semi-finals

We start nice and early at 09:30 EEST with the quarter-finals completing at just after 12. The semi-finals start at 18:30 EEST. 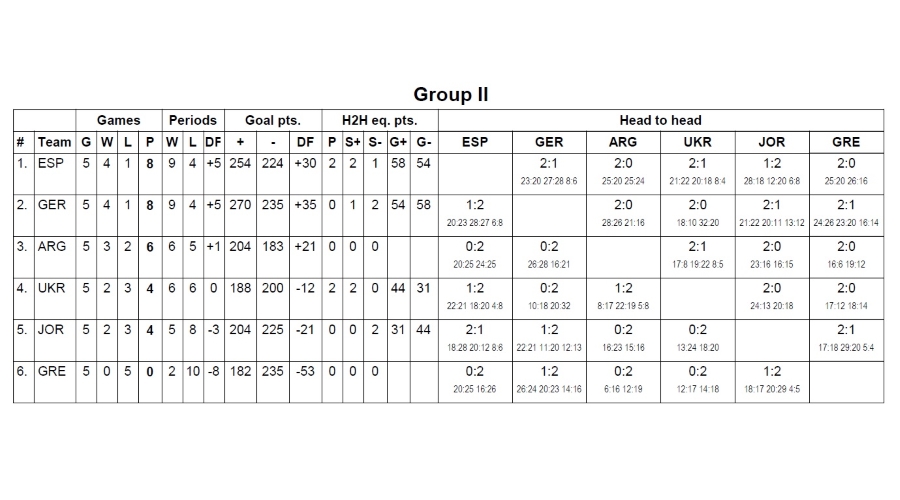 After beating Jordan earlier on in competition, Ukraine beat them to the last eight after they both ended on four points each. It marks the end of the road for the Asian side who had started off in Greece so well, beating Spain in a shoot-out.

Bronze medallists at the last event, Argentina, are getting close to another podium finish, just like title-holders Spain.

Jordan will be hoping to get back to winning ways, against Germany with Spain and Ukraine and Greece against Argentina wrapping up the round. 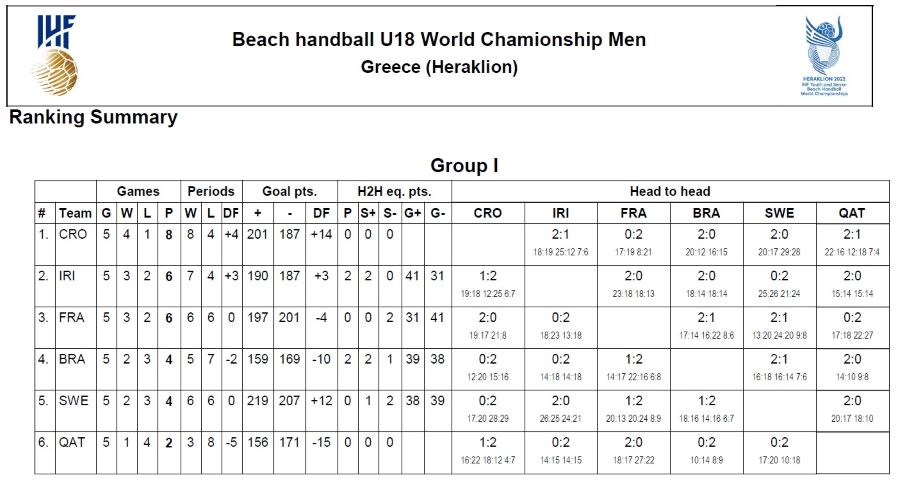 Sweden's goalkeeper overthrows his attempt into an empty net and the ball nestles on top. It's all on France now and Baptiste Perchicot swerves the onrushing Swedish goalkeeper in a feint Ronaldo would have been happy with.

He delivers into an open goal and wild celebrations are sparked. This time, in a reverse like the other day, the French women run on to celebrate.

European champions Sweden have gone out and another team in yellow will be happy – Brazil. Despite losing, they are through on the head-to-head table.

Sweden started Greece 2022 with three, straight 2-0 wins. They then lost all three of their main round games.

That's how it goes sometimes.

17:29 EEST Four out of five attempts scored each from Sweden and France

It is out of their hands now, Brazil need Sweden to defeat France in their ongoing shoot-out. Sweden need to win too. Wow. A lot to take in.

17:24 EEST Qatar vs Croatia now going to a shoot-out

Not much else to say on that really. It's all happening here.

17:21 EEST Shoot-out for France to save their chances, Sweden could go out, really? Beach handball. Wow.

France need to win here. That's an understatement. They are in a shoot-out with the European champions now after coming back to take the second set.

There is also a scenario where the Swedes could go out – is it even possible?

These are the choices, generally-speaking, you hear from championship DJs and music production companies when you travel around the world to handball competitions and these specific teams play.

Of course, they are used to it.

For Sweden at half-time today, having won the first period against France 20:13, the DJ here played Abba's 'Gimme, Gimme, Gimme (a man after midnight)'.

What France need are points, more than the Swedes in the second set.

Iran are beating Brazil 1-0 in the Peixe-derby (see below) and Croatia will confirm their spot at the top of the table and send Qatar out if they hold on to their lead.

With Brazil and France both losing, if all scores stay the same, they will end up in fourth and fifth place on four points each – but with Brazil having beaten the French earlier here, they will go through on the head-to-head record in the fourth quarter-final spot.

Three cracking games are underway right now. Who's your pick?

Qatar and Croatia have clashed many times at senior level in medal matches - now they meet for the first time at youth level.

Finally, Sweden vs France - a classic indoor clash now on the sand with a lot to play for.

There are no more men's games until 16:50 EEST so get refreshed and recharged and join us then.

With their 2-0 win over Uruguay, the Czech Republic complete the clean sweep of three continents – they also beat the USA and Togo.
Next up is the 9-16 placement round and they will be aiming to show their quality against some opponents who made it into the main round.

The European team have taken the first set against Uruguay in their consolation clash on the central court just now. They won it 26:21.

If they hold on, it will be their fourth straight win at Greece 2022, having won both of their previous consolation games – against Togo and the USA – plus their last preliminary group game against Jordan.

In their five games so far, they have only lost twice in Heraklion, once against the title-holders Spain and in a dramatic shoot-out against the hosts in their opening game.

Fine margins are what makes this sport so exciting but that will not be of comfort to the Czech Republic side, who could quite possibly be the unluckiest side in the championship having not qualified for the main round, despite winning a group game.

The USA men’s youth team have won their first-ever Beach Handball World Championship game. They won the second period 18:8 to take a 2-0 win.

09:45 EEST Another day has started

We're underway here in Heraklion with the USA taking on Togo in the consolation round.

First set for the USA in Greece

The Americans have registered their first set victory here in Heraklion. They have beaten Togo 23:16. Why not watch the second set live on our YouTube channel? The final day of the main round is about the start and it is going to be a promising one, where so much can still happen.

Just as yesterday, we will start the day with consolation matches, though, before the main round continues in the afternoon. First up are USA and Togo, followed by Czech Republic versus Uruguay at 10:20.

Let's get ready to rumble!