Live blog: It's a crucial one, day 3 at the 2022 IHF Men's Beach Handball World Championship, as the teams play two matches, which can already decide their Greece 2022 fate. The main round is ready to throw-off at 10:40 EEST, while the day opens with Ecuador vs New Zealand.

16 games have been played and the sun has been hot.

The host nation men have been handed their first defeat at Greece 2022, by Uruguay. They won 9:8 after winning the initial period 22:18, but letting Greece back in 22:26 in the second.

21:17 EEST Greece and Uruguay is going to a shoot-out

The host nation men have turned it around, it's 1-1 and now it's shoot-out time.

They've just beaten Denmark in the EIGHTH round of shots in a shoot-out. 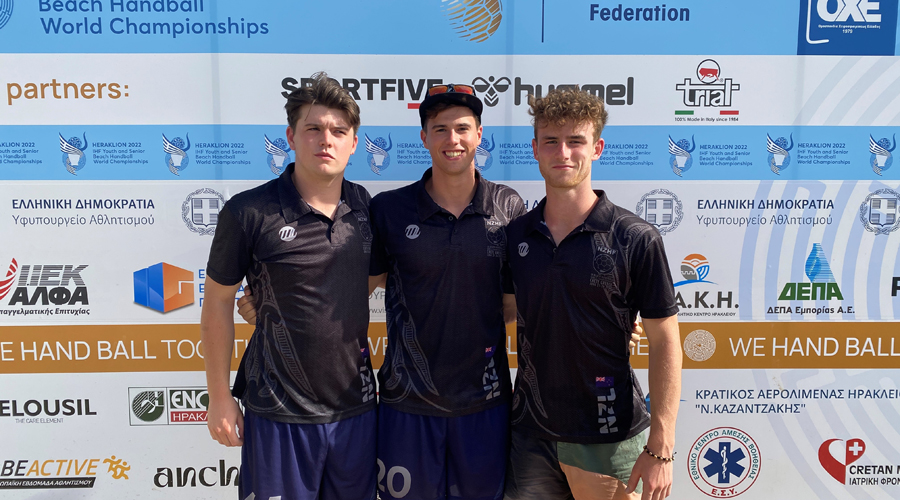 New Zealand’s Angus Hamilton, Paul Ireland and Max Brookes spoke to ihf.info about being part of the kiwi side which beat Puerto Rico 2-0 today to register the first-ever IHF Men’s Beach Handball World Championship for the side from Oceania.

The trio were also part of the New Zealand youth team who played in the 2017 IHF Men’s Youth Beach Handball Championship in Mauritius where they recorded four wins, two against Togo and two against South Africa – the first-ever world championship beach wins for the country

“Credit to all the boys on how everyone came together and did what needed to be done,” said Hamilton about coming back from the loss against Ecuador this morning to turn it around and beat Puerto Rico in the afternoon.

“We were a little bit disappointed about that,” added Ireland about the loss against the South Americans. “We definitely tried to go hard for that game (Ecuador), but we knew we had to lift it for Puerto Rico, it was our big target and we definitely delivered on that.”

Hamilton represented New Zealand at their first senior men’s beach handball world championship appearance and said the experience that he, Hamilton and Ireland brought to the team from their Mauritius helped in a little way.

“Having had guys that have had experience at a world champs showed that we've kind of been through it a little bit,” he said. “But then that extra four years of beach handball being a ‘thing’ in New Zealand has really allowed us to grow as a team and be able to come to the world stage and compete in a number of games.”

17:05 EEST A long game comes to an end as Iran claim a shoot-out victory

16:00 EEST New Zealand off the mark, Ecuador win for the second game running

Ecuador win their second game ever and second at Greece 2022. We'll have quotes from both teams coming up.

They couldn't, could they? World championship debutants - and hosts - Greece have just beaten Spain in a shoot-out, 9:8. After losing the first period clearly (20:30), they squeezed past in the second (20:19) with a golden goal. The crowd are going wild here.

The hosts are now through to the quarter-finals with six points - the minimum goal demanded by their coach on Monday. Their six points means that neither Argentina or Spain fifth and sixth cannot catch them with two games remaining and on zero points each.

Joining them in the last eight are Croatia, who saw off the South Americans 2-0. Fellow South Americans Uruguay, just beat their North American rivals USA via a shoot-out too. The second games this evening (17:10 EEST) will be interesting!

Since our last post, four games have completed - you can see all the results here.

Most importantly, Brazil and Denmark are now up to six points each and have confirmed their quarter-final places as they cannot be caught by the teams ranked in fifth and sixth who just so happen to be the ones they just beat.

One of those teams is Iran and in an emotional game (see below), The Professor was not able to defeat his students.

The women's competition has a pause and in the men's right now we have three games and a total of seven between now and the afternoon break.

It's emotional over on court 2 as Brazil men's legendary coach Antonio Guerra Peixe (known as 'The Professor') is coaching against Brazil in his new role as Iran head coach.

They were 1-0 ahead, it was 24:24 and there was just a few seconds left of the second period, time out Ecuador.

New Zealand did all they could but Luis Johnny Nieves Caicedo can now put his name in the record books of Ecuadorian handball - his single-pointer won the period, the game and made history: they've got their first win.

The Ecuadorian men have just taken the first period against New Zealand out here on court 3. It's the first-ever IHF Beach Handball World Championship period in history for the South American nation.

08:45 EEST Main round action to begin

As the preliminary round concluded yesterday, 12 teams will continue their race for the title with the first main round day today.

In the first match of the day, Ecuador have another opportunity to grab their first-ever World Championship win in the consolation round against New Zealand, who will be hoping to get off the mark in Greece themselves.

The clear highlight on the opening day is Islamic Republic of Iran taking on Brazil in Main Round Group II. In what is sure to be an emotional match, it marks the first time that Brazilian coaching legend Antonio Guerra Peixe goes up against his former team as the newly-installed Iran coach.

Denmark face Portugal in a repeat of their European championship quarter-final from last year, won by the Danes 2-0. Who will emerge victorious today? Let's find out!

You can read all about the first main round day in our preview here.