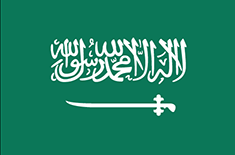 Saudi Arabia qualified for their fourth World Championship in a row and their ninth in total. In 2013 in Spain they won the prestigious placement match 19/20 against their neighbours Qatar, but then those teams went separate ways. While Qatar strengthened their squad by naturalised players, the Saudis still count on players from their domestic league, mainly the top clubs Al-Noor and former Asian Champions League winners Mudhar. After the 1996 Olympic Champion Nenad Kljajic had developed the team for many years, the Croat was succeeded by Fernando Barbeito right after the 2017 World Championship in Spain. The Spaniard, a former FC Barcelona player, took over a well-rehearsed team. At the 2018 Asian Championship in Suwon, Korea, they made it to the semi-final after beating the hosts and Iran in the main round. In the semi they gave a tough fight to Bahrain, but finally lost 22:24. Saudi Arabia lost the bronze final too – against Korea 21:29. But all four semi-finalists had already booked their tickets to Germany and Denmark. Barbeito can count on an experienced squad, with the key players all around 30 years old.